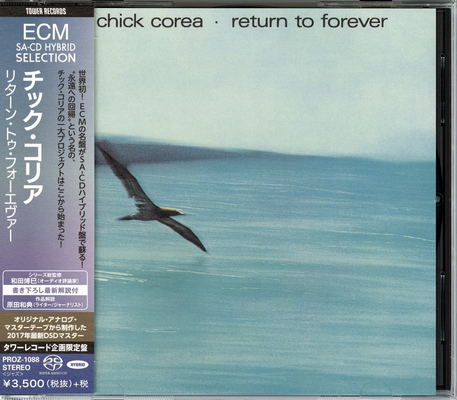 The legendary first lineup of Chick Corea’s fusion band Return to Forever debuted on this classic album (titled after the group but credited to Corea), featuring Joe Farrell on soprano sax and flute, the Brazilian team of vocalist Flora Purim and drummer/percussionist Airto Moreira, and electric bass whiz Stanley Clarke. It wasn’t actually released in the U.S. until 1975, which was why the group’s second album, Light as a Feather, initially made the Return to Forever name. Nonetheless, Return to Forever is every bit as classic, using a similar blend of spacy electric-piano fusion and Brazilian and Latin rhythms. It’s all very warm, light, and airy, like a soft breeze on a tropical beach — hardly the sort of firebrand approach to fusion that Miles Davis, Tony Williams, and the Mahavishnu Orchestra were exploring, and far less rooted in funk or rock. Corea also bathes the album in an undertone of trippy mysticism, not only in the (admittedly dated) lyrics, but in his cosmic keyboard wanderings, which remain melodic and accessible through most of the record. There’s one genuine pop song in the groovy samba “What Game Shall We Play Today,” and while “Sometime Ago” has similar elements, it’s part of an ambitious side-long medley that features a stream-of-consciousness intro and a jubilant, Spanish/Mexican-style closing section called “La Fiesta,” complete with castanets and flamenco modes. The title track is another multi-sectioned work, featuring Corea and Purim in wordless unison on two different, catchy themes, plus breezy work from Farrell and lots of Brazilian-flavored rhythmic interplay. And the dreamy, meditative “Crystal Silence” is an underrated gem waiting to be rediscovered. Certainly, this edition of Return to Forever wasn’t inclined toward high-voltage jazz-rock (as the next one was), but this group’s two albums still stand as some of the most imaginative and distinctive early fusion recordings. ― Allmusic