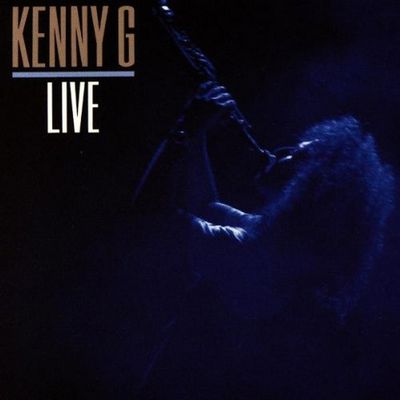 Quite often, so-called smooth jazz artists who are mindlessly predictable in the studio become a lot more spontaneous and risk-taking on-stage. Playing for themselves instead of pandering to radio, they’re much more inclined to let loose. But Kenny G Live was only a slight improvement over 1986’s Duotones and 1988’s Silhouette, the knee-jerk studio recordings that made him a superstar. Released as both a two-LP set and as a single CD, Kenny G Live contains only a few decent offerings. The saxophonist actually lets loose on the funky “Midnight Motion” and the catchy “I’ve Been Missin’ You,” which he co-wrote with R&B singer Kashif for 1983’s G Force. But he demonstrates how boring, corny, and toothless his playing can be on “Esther,” “Home,” and “Silhouette.” Equally soulless are “Don’t Make Me Wait for Love” (which features the very contrived pop singer Michael Bolton), and two new studio offerings, “Going Home” and “Uncle Al.” Kenny G Live’s weaknesses by far outweigh its strengths, making this a release that should be avoided. ― Allmusic