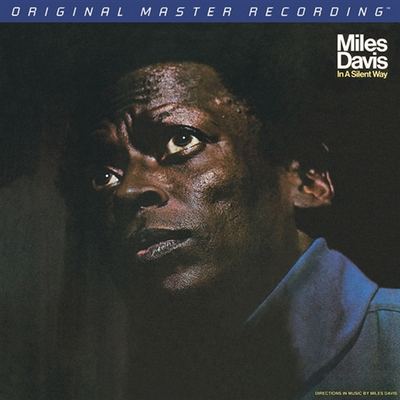 Listening to Miles Davis’ originally released version of In a Silent Way in light of the complete sessions released by Sony in 2001 (Columbia Legacy 65362) reveals just how strategic and dramatic a studio construction it was. If one listens to Joe Zawinul’s original version of “In a Silent Way,” it comes across as almost a folk song with a very pronounced melody. The version Miles Davis and Teo Macero assembled from the recording session in July of 1968 is anything but. There is no melody, not even a melodic frame. There are only vamps and solos, grooves layered on top of other grooves spiraling toward space but ending in silence. But even these don’t begin until almost ten minutes into the piece. It’s Miles and McLaughlin, sparely breathing and wending their way through a series of seemingly disconnected phrases until the groove monster kicks in. The solos are extended, digging deep into the heart of the ethereal groove, which was dark, smoky, and ashen. McLaughlin and Hancock are particularly brilliant, but Corea’s solo on the Fender Rhodes is one of his most articulate and spiraling on the instrument ever. The A-side of the album, “Shhh/Peaceful,” is even more so. With Tony Williams shimmering away on the cymbals in double time, Miles comes out slippery and slowly, playing over the top of the vamp, playing ostinato and moving off into more mysterious territory a moment at a time. With Zawinul’s organ in the background offering the occasional swell of darkness and dimension, Miles could continue indefinitely. But McLaughlin is hovering, easing in, moving up against the organ and the trills by Hancock and Corea; Wayne Shorter hesitantly winds in and out of the mix on his soprano, filling space until it’s his turn to solo. But John McLaughlin, playing solos and fills throughout (the piece is like one long dreamy solo for the guitarist), is what gives it its open quality, like a piece of music with no borders as he turns in and through the commingling keyboards as Holland paces everything along. When the first round of solos ends, Zawinul and McLaughlin and Williams usher it back in with painterly decoration and illumination from Corea and Hancock. Miles picks up on another riff created by Corea and slips in to bring back the ostinato “theme” of the work. He plays glissando right near the very end, which is the only place where the band swells and the tune moves above a whisper before Zawinul’s organ fades it into silence. This disc holds up, and perhaps is even stronger because of the issue of the complete sessions. It is, along with Jack Johnson and Bitches Brew, a signature Miles Davis session from the electric era. ― Allmusic