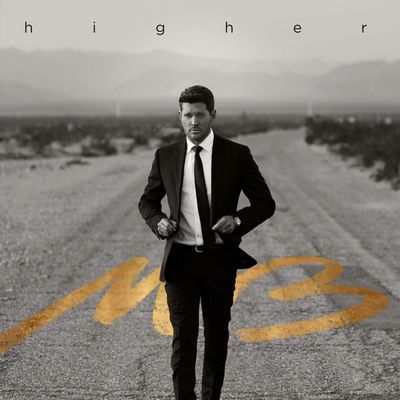 With his velvety voice and urbane charm, Michael Bublé is the epitome of the modern crooner, ably interpreting American Songbook standards alongside modern pop covers, as well as his own ebullient originals. He further conjures this vibe on his 11th studio album, 2022’s appealing Higher. One the most notable aspects of Higher is the presence of Paul McCartney, whose song “My Valentine” (culled from 2012’s Kisses on the Bottom) Bublé covers to fine effect here, with McCartney producing. A moody, minor-key ballad, the song evokes the work of iconic French singer Jacques Brel and recalls how McCartney (a long-avowed jazz and standards aficionado) would often bring such influences to the Beatles, further broadening that group’s cross-generational appeal. It’s one of the standout moments on Higher and nicely illuminates the stylistic balance between jazz, traditional pop, and contemporary pop that Bublé is going for. On Higher, Bublé is often at his best when taking on jazz standards, represented here in tracks like the big-band swing of “Don’t Get Around Much Anymore” or the orchestral romance of “A Nightingale Sang in Barclay Square.” His relaxed, kitten-soft voice is a perfect match for the nuanced and sophisticated style of these songs. There’s also a knowing quality about Bublé, as if he’s well aware of the bygone aesthetic he’s playing with by being an old-school crooner in the post-modern age — it’s a persona that’s wry, a little campy, and helps sell his more over-the-top choices — like taking on the ’70s show biz disco of Barry White’s “You’re My First, My Last, My Everything.” His ironic schmooze achieves technicolor brilliance on the flamboyant 1930s movie soundtrack arrangement of Charlie Chaplin’s “Smile.” Replete with shimmering strings and what sounds like a backing chorus of winged angels, it ends the album but might have worked even better as an opening track. There’s also an amiable duet with Willie Nelson on the country icon’s classic “Crazy” that has the relaxed, in-the-moment energy of a Muppet Show performance. Of his original songs, the standout is the title track. Co-written by Greg Wells, OneRepublic’s Ryan Tedder, and even Bublé’s eight-year-old son, Noah (who recovered from his battle with liver cancer in 2017), “Higher” is a fun, tango-influenced banger that sticks in your head. There’s also the romantic “I’ll Never Not Love You” and the heartfelt tribute to his mom, “Mother,” all songs that (like his 2005 hit “Home”) add a bit of earnest warmth to the album’s overall buoyant, swinging feeling — one that Bublé has made his own. ― Allmusic