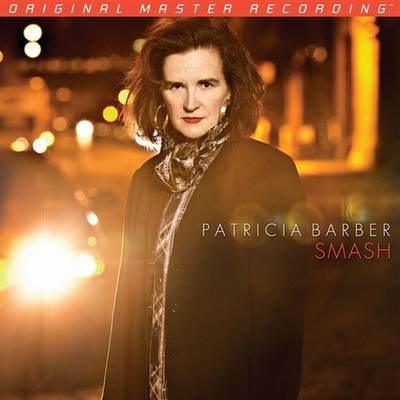 Patricia Barber is a crack jazz pianist, an innovative composer, a singular vocal stylist, and among the most original lyricists/song-poets to come down the pipe in 40 years. Her use of metaphor and metonymy is woven inextricably into her trademark melodies, which create mental and sonic images that evoke insight and emotion. Smash, Barber’s debut for Concord, is comprised of original material performed by an excellent band that includes guitarist John Kregor, bassist Larry Kohut, and drummer Jon Deitemyer. The predominant subject matter of these songs is love’s loss: the frustrated desire, grief, acceptance, longing, and healing its aftermath brings. Barber is as empathic and insightful as a depth psychologist. Her language is rich, precise, and devoid of trite sentimentality. Lyrically, these songs are wound with the elastic imagery of poetry, but their rhyme schemes are taut, given air by the fluidity of her jazz. Opener “Code Cool” is introduced by Deitemyer’s snare and hi-hat in a constant thrum that emulates the pulse of electronic dance music. It’s underscored by a one-note vamp from Kohut. Barber’s piano illustrates with a series of glissando chords as Kregor fills the space expressionistically, highlighting the well of images and urgency in lyrics which reference science, Keats, and medical treatment before concluding she is “…Michaelangelo’s David/Tested and worn…” Barber employs space between sections, stilling the proceeding with a single chord, before that pulse returns to her protagonist’s realization that she needs to fake it until she makes it: “I will live/As if/I were loving.” “The Wind Song” is a brooding, mysterious ballad, whose lyric drama is spacious, highlighted by brushed symbols, acoustic guitar, nearly gossamer pianism, and a physical bassline to bind it to earth. In the title track’s first half, the piano and bass offer the tender illustration of “the sound of a heart breaking…” But at the halfway point, the physical fury of that emotion is laid bare by Kregor’s screaming electric guitar solo, which allows for the held, breathless emotional power in this and all the previous songs, release. The companion piece is “Scream,” where a jazz piano ballad opens into a nearly full-blown rocker. “Redshift” is a crystalline bossa nova; its lyrics unite love’s loss with physics in clever, hip associations punctuated by a syncopated groove. “Bashful” is a swinging post-bop instrumental that features great soloing by everyone. “Missing” is introduced by Kregor’s acoustic and Barber’s sparse piano. It’s a musically metaphorical illustration of the tune’s subject matter: waiting in vain, hoping against hope that the truth of loss isn’t, in fact, true. It’s raw, vulnerable, and fearful. Kregor’s gorgeous solo and Kohut’s economical bassline offer room for Barber’s piano to illuminate the lyric with tenderness. Smash is an extraordinary achievement. Here, jazz is popular music without being anything other than itself. Its depth, creativity, searing poetry, and artisan musicianship make it a peerless accomplishment. ― Allmusic