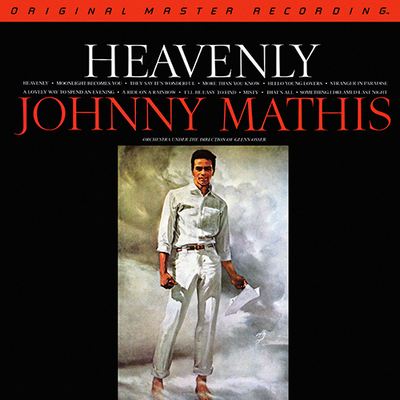 Heavenly is Johnny Mathis’ most successful regular album release, exceeded in his catalog only by the compilation Johnny’s Greatest Hits and the seasonal Merry Christmas collection. It’s not hard to understand why; this record is the epitome of Mathis’ approach to music. Standards like “More Than You Know” and “Moonlight Becomes You” are joined by show tunes like “Hello, Young Lovers” and “Stranger in Paradise” and a few more recent titles, such as the Burt Bacharach-composed title song and “That’s All.” The tempos are slow, the strings swell, and Mathis’ vulnerable tenor, dripping with tender emotion yet never missing a beat, soars and swoops over all. The best track, a revelation when it appeared on this album, is “Misty,” a treatment of Erroll Garner’s jazz piano classic with a newly added lyric by Johnny Burke. Few could have carried off that lyric (go ahead, try and think of another male singer of the ’50s who could handle it), but it was perfect for Mathis, and the track was spun off for a single that became his biggest hit in two years and remains one of his signature songs. Though still fairly early in his career, Mathis had done a lot of recording; Heavenly was actually his tenth album release in less than three years (counting two hits collections and the Christmas album). As a result, he was a recording veteran while still being fresh enough to give his performances real feeling. It all came together on Heavenly, Mathis’ longest running number one album which spent more than five-and-a-half years in the charts. ― Allmusic