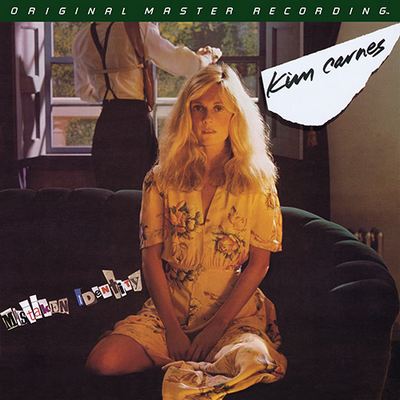 Mistaken Identity should have established Kim Carnes as a huge international star. Her Rod Stewart rasp, affiliation with Kenny Rogers, management by Ken Kragen when he was arguably at his peak, makes one wonder why the across-the-board success of “Bette Davis Eyes” couldn’t be duplicated. Three years after the success of this album, Tina Turner actually did conquer the world, the various producers on Private Dancer weaving enough different textures to make for a multi-dimensional masterpiece. Too many cooks made for wonderful stew. Val Garay certainly did a good job on Mistaken Identity, more defined than his work with Marty Balin on the Lucky album a year after this, an album which, for that great artist, wasn’t very…lucky. It’s not that the other Donna Weiss/Jackie DeShannon tune, “Hit and Run,” which follows “Bette Davis Eyes,” doesn’t have a good performance; it does. The problem with the Mistaken Identity album is that everything on it stands in the shadows of a masterpiece. The country risqué of the Jackie DeShannon original from New Arrangement has as extraordinary a re-working as Lou Reed’s “Rock & Roll” got from Bob Ezrin when Mitch Ryder got to make it his underground anthem. Carnes is just brilliant on her solo composition, “Mistaken Identity, and it is subtle and smart enough to have crossed over to adult contemporary and jazz formats. Frankie Miller’s “When I’m Away From You” sounds like Rod Stewart doing “True Blue” — those upfront snare drums and a hook as strong as an undertow. Perhaps this should have been the follow-up to “Bette Davis Eyes” rather than “Draw of the Cards,” which followed and lingered around the Top 30. Not a place to be for the follow-up to a monster smash. This is an evolution from her work on A&M, and certainly far removed from the New Christy Minstrels. The album comes with photographs galore on the innersleeve, all the lyrics, and tons of credits. Her first hit on EMI about ten months earlier was the fantastic reworking of “More Love,” and that elegant pop gem was the type of thing needed to propel this to the status Private Dancer attained for Turner, that Physical garnered for Olivia Newton-John. “Draw of the Cards” plays like a mellow dance number, aimed at a new wave audience when — well, face it, her biggest smash before “Bette Davis Eyes” was the mellow “Don’t Fall in Love With a Dreamer.” There is absolutely no pun intended to say this album is more of an identity crisis than a mistaken identity. Wendy Waldman, Carnes, and her husband, Dave Ellingson, craft “Break the Rules Tonite (Out of School),” but it is just too much of a diversion on an album that tests the waters of different rock genres. Flirting with Leslie West-style hard rock is not as appealing to her audience as the beautifully crafted Tom Snow/Dean Pitchford tune “Don’t Call It Love.” Her other solo composition, “Miss You Tonite,” is more the style we expect, and Carnes’ beautiful piano work on Richard Stekol’s “My Old Pals” brings the album to a proper conclusion. If only this big and talented team could have come up with another couple of brilliant new arrangements as they did with “Bette Davis Eyes.” The name Kim should be up there with Olivia, Tina, and Grace, and it wasn’t for lack of talent that superstardom didn’t occur. ― Allmusic