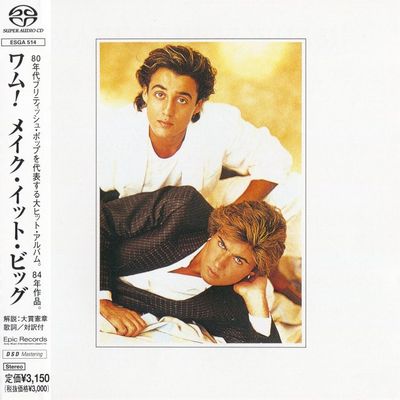 The title was a promise to themselves, Wham!’s assurance that they would make it big after struggling out of the gates the first time out. They succeeded on a grander scale than they ever could have imagined, conquering the world and elsewhere with this effervescent set of giddy new wave pop-soul, thereby making George Michael a superstar and consigning Andrew Ridgeley to the confines of Trivial Pursuit. It was so big and the singles were so strong that it’s easy to overlook its patchwork qualities. It’s no longer than eight tracks, short even for the pre-CD era, and while the four singles are strong, the rest is filler, including an Isley Brothers cover. Thankfully, it’s the kind of filler that’s so tied to its time that it’s fascinating in its stilted post-disco dance-pop rhythms and Thatcher/Reagan materialism — an era that encouraged songs called “Credit Card Baby.” If this dichotomy between the A-sides and B-sides is far too great to make this essential, the way Faith later would be, those A-sides range from good to terrific. “Wake Me Up Before You Go-Go” is absolute silliness whose very stupidity is its strength, and if “Everything She Wants” is merely agreeable bubblegum, “Freedom” is astounding, a sparkling Motown rip-off rippling with spirit and a timeless melody later ripped off by Noel Gallagher. Then, there’s the concluding “Careless Whisper,” a soulful slow one where Michael regrets a one-night stand over a richly seductive background and a yearning saxophone. It was an instant classic, and it was the first indication of George Michael’s strengths as a pop craftsman — which means it points the way to Faith, not the halfhearted Edge of Heaven. ― by Allmusic