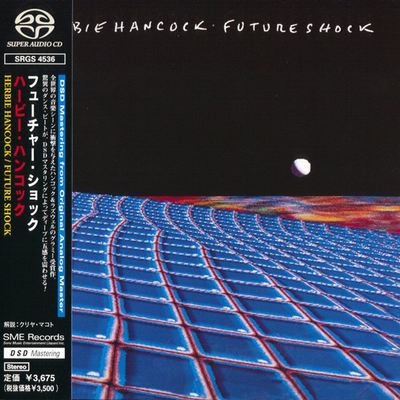 Much of the album was initially composed by the team of avant-garde bassist and record producer Bill Laswell, and keyboardist and producer Michael Beinhorn, and played on tour by their group Material in 1982, as a precursor to recording the follow-up album to Material’s One Down album (on which Whitney Houston was the lead singer on a cover of the Soft Machine song “Memories”). Hancock was approached to collaborate on this recording that would go towards a postmodern direction, instead of his usual jazz-fusion. The result was a hip-hop influenced album, released under Hancock’s name, which combined Hancock’s keyboard playing with Laswell’s arrangements and Grand Mixer DXT’s turntablism.

According to 1999 re-issue’s liner notes, when Laswell went to buy speakers at a music equipment store he would insist on testing them by playing the demos of “Rockit” and “Earth Beat”. While those songs were played through the speakers, passing by customers apparently liked what they heard and danced to the music. Soon after Laswell let Hancock know about the incident, eventually telling him – “We got something good here.”

“Rockit”, the album’s big hit, was accompanied by one of the most successful music videos of the era. The video, directed by Godley and Creme of 10cc fame, featured dancing robots made by Jim Whiting, moving around to the beat of the music and the turntable scratching. Hancock won several MTV Music Video awards in 1984, as well as the Grammy award for best R&B performance.

The album’s cover art was derived from a work created by David Em.