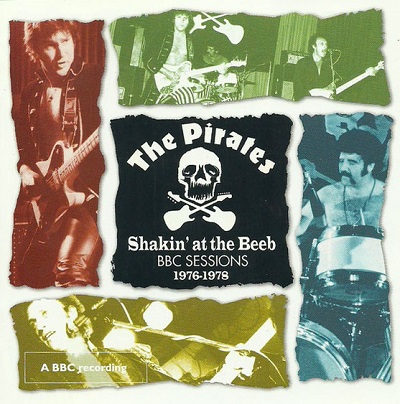 The Pirates — guitarist Mick Green, bassist Johnny Spence, and drummer Frank Farley — cut their teeth in the mid-’60s as the backing band for British rock belter Johnny Kidd, but when Kidd died in an auto accident in 1966, their career went into a tailspin and they broke up a few years later. However, in the mid-’70s the Pirates were encouraged by the success of tough R&B acts like Dr. Feelgood and the Count Bishops to pick up their instruments and give it another go, and for a few years they earned a reputation as one of the tightest and most feral rock & roll bands in the U.K. Green played guitar fast and fiery, Spence and Farley were a tireless and muscular no-nonsense rhythm section, and their take on blues-based first-era rock was blazing stuff, raw and furiously energetic but with the precision that came with years of experience. The live side of their superb 1977 comeback album, Out of Their Skulls, demonstrates just how good a live band the Pirates could be, and this two-CD set of BBC radio recordings of the band during the first two years of its reunion is back-to-basics rock at its most vital. Disc one of Shakin’ at the Beeb features three studio broadcasts — a late-1976 appearance on the show It’s Rock ‘n’ Roll and two John Peel sessions taped in January and November 1977 — along with a gig at the BBC’s Paris Theater from September 1977, and while Green’s guitar doesn’t fare well in the Paris Theater recordings, the Pirates are clearly more enthusiastic playing before a live audience, though they deliver the goods with no small fury on the studio material as well. The stops are well and truly pulled out on disc two, featuring two live concert recordings (May and November 1978) that correct the thin sound on Green’s axe, and a third Peel session from May 1978. The Pirates’ return in the ’70s happened to coincide with the rise of punk rock, and while the Pirates weren’t punks by any means, if there had been more bands like them punk’s overthrow of complacent rock gods wouldn’t have been necessary — this group delivered barroom-ready rock & roll with all the sweat and vigor anyone could ask for, and Shakin’ at the Beeb is an excellent document of the Pirates at their peak. ― Allmusic