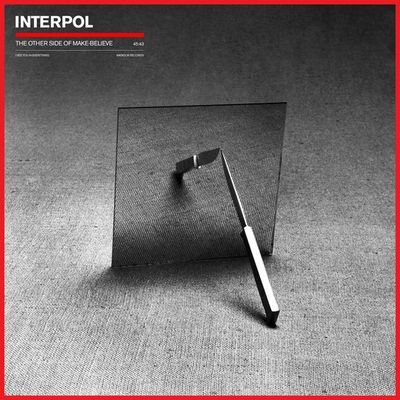 Taking a different tack than they did on 2018’s jolting Marauder, Interpol lean into the quieter, shadowy aspects of their style on The Other Side of Make-Believe. Since Turn on the Bright Lights’ “Untitled,” the band’s contemplative side has been a vital part of their music, and at times, the inward-looking drift of their seventh album works well. This is especially true of Make-Believe’s bookends: “Toni” begins the album promisingly with billowing piano and a graceful vocal from Paul Banks, while the pleading “Go Easy (Palermo)” ends it with an uncertainty that feels like an apt summation of life in the early 2020s. Too often, though, Interpol’s chemistry goes beyond easy to subdued. Songs such as “Fables” feel a beat or two slower than they should be, and while “Into the Night” delivers the brooding that’s second nature to this group, it meanders without a climax or, seemingly, a point. While the band’s performances are all strong (in particular, drummer Sam Fogarino tries his best to add movement and tension) and producers Flood and Alan Moulder give the album a pleasing depth and heft, The Other Side of Make-Believe doesn’t truly come together until its second half. Interpol pick up the pace a little with the haunted, nomadic romance of “Gran Hotel,” and if the spiky guitars and galloping beat of “Renegade Hearts” sound familiar, they also sound good. Conversely, “Passenger” channels the album’s formless tendencies into a mellow stream-of-consciousness flow when it glides into its euphoric choruses. Best of all is “Something Changed,” where Fogarino’s slinky beat adds elegance to Banks’ ruminations. Similarly, the noirish storytelling of “Big Shot City” is a welcome addition to the song’s mystique. By turns frustrating and engaging, The Other Side of Make-Believe is decidedly uneven, especially coming after the frequently great Marauder. Nevertheless, it offers plenty of mood and a little bit of innovation from a band still revealing nuances to their sound 20 years after their debut. ― Allmusic