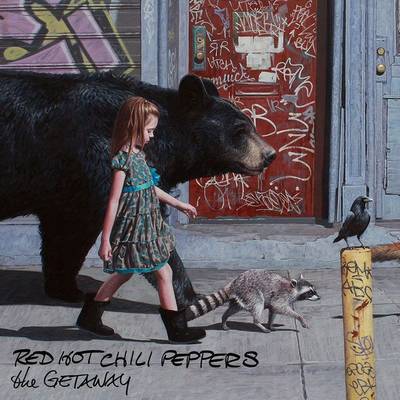 The Red Hot Chili Peppers’ 11th studio album, 2016’s The Getaway, is a sophisticated work of dark-hued maturity that finds the long-running California outfit expanding their sound into nuanced, ’70s-style orchestral soul and funky psychedelia. The album follows the equally adventurous I’m with You (2011) and once again showcases guitarist Josh Klinghoffer, who replaced John Frusciante in 2009. A major difference, however, between I’m with You and The Getaway was the band’s choice to work with producer/instrumentalist Brian Burton (aka Danger Mouse). This makes The Getaway the first album the Red Hot Chili Peppers have recorded without longtime collaborator Rick Rubin, who has helmed each of the band’s albums since 1991’s Blood Sugar Sex Magik. While the choice helps differentiate The Getaway on a spiritual level, sonically it feels as if the band and Klinghoffer have finally gelled as a complete creative unit. Maybe that’s due to having I’m with You under their belt, or perhaps it’s due to Kiedis having purportedly gone through a painful break-up. Either way, the result is a subtle yet significant advance from I’m with You that feels just that much more focused. Cuts like the disco-inflected title track and the ’80s electro-infused “Go Robot” reveal the band’s knack for coloring their sound in surprising ways. Others, like “We Turn Red” and “This Ticonderoga,” are athletic funk-punk jams. Elsewhere, their chance-taking nature pays dividends, as on the Elton John collaboration “Sick Love.” A laid-back groover featuring John on piano with lyrics by Bernie Taupin, the song is an album standout, bringing to mind ’70s-era Isley Brothers. Similarly, tracks like the flowing “The Longest Wave” and the densely layered “Feasting on the Flowers,” have a melodic, psychedelic quality that feels inspired by the Beatles’ late-’60s period. However, it’s the sprawling, hypnotic album closer, “Dreams of a Samurai,” that seems to pull all of The Getaway’s disparate themes together in a bold, anthemic, fever dream of a song. Beginning with a minor-key piano intro, the song evolves into a roiling cinematic epic with Kiedis’ yearning baritone framed in Klinghoffer’s sweltering layers of wet, echoey guitars, Flea’s rounded, circular basslines, and drummer Chad Smith’s frenetic rhythms. They even make room for a soaring choir in the background that adds to the song’s often malevolent, dream-like atmosphere. At once transformative and self-critical, the song finds Kiedis in a philosophical mood, painting himself as a lonely “metamorphosis samurai” singing, “I’ve lost myself out on the range.” While none of the songs on The Getaway play out as literal stories of Kiedis’ relationship, there is an underlying sense of heartbreak at the core of many of his lyrics. On “Dark Necessities,” he sings, “Spinning knot that is on my heart is like a bit of light in a touch of dark/You got sneak attack from the zodiac/But I see your fire spark.” Ultimately, The Getaway is a nuanced album, rife with journeyman craft and poetry, that proves the Red Hot Chili Peppers still have plenty of their own creative fire. ― Allmusic