Steve Miller had started to essay his classic sound with The Joker, but 1976’s Fly Like an Eagle is where he took flight, creating his definitive slice of space blues. The key is focus, even on an album as stylishly, self-consciously trippy as this, since the focus brings about his strongest set of songs (both originals and covers), plus a detailed atmospheric production where everything fits. It still can sound fairly dated — those whooshing keyboards and cavernous echoes are certainly of their time — but its essence hasn’t aged, as “Fly Like an Eagle” drifts like a cool breeze, while “Take the Money and Run” and “Rock ‘n Me” are fiendishly hooky, friendly rockers. The rest of the album may not be quite up to those standards, but there aren’t any duds, either, as “Wild Mountain Honey” and “Mercury Blues” give this a comfortable backdrop, thanks to Miller’s offhand, lazy charm. Though it may not quite transcend its time, it certainly is an album rock landmark of the mid-’70s and its best moments (namely, the aforementioned singles) are classics of the idiom. ― Allmusic 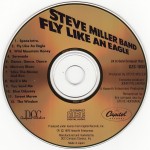