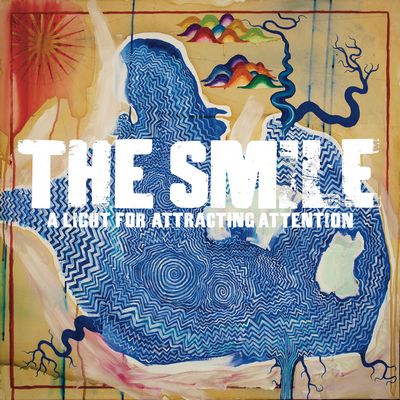 Upon first listen, one might mistake the Smile’s debut, A Light for Attracting Attention, for a Radiohead album. Considering that band’s Thom Yorke and Jonny Greenwood (as well as longtime producer Nigel Godrich) are two of the three core members of this side project, it’s not a surprise. Conceived during the COVID-19 lockdown as a way for Yorke and Greenwood to jam, the Smile also features drummer Tom Skinner of modern jazz group Sons of Kemet, who invigorates the album with his lively backing and dizzying time signatures. With the help of Greenwood’s friends in the London Contemporary Orchestra and various jazz artists from Skinner’s orbit, the trio lean into their progressive and psychedelic tendencies here, sounding like an expansive, mind-bending version of Yorke and Greenwood’s main band. Many of Radiohead’s typical hallmarks — anxiety, dread, angst, and tension — are present, with Yorke delivering reliably passionate performances and heady lyrics across all tracks. The frantic, horn-backed storm “You Will Never Work in Television Again” and the driving, synth-hazed “We Don’t Know What Tomorrow Brings” channel the anger and frustration heard on Hail to the Thief, winding up as the most aggressive Yorke has sounded in years. Meanwhile, the elastic groover “The Opposite” and the jittering “Thin Thing” find the trio locked-in as a formidable unit, with Skinner’s drumming building to head-rattling levels as Greenwood’s guitar noodling and Yorke’s detached falsetto push the songs to bewitching heights. On the opposite end of the energy scale, the atmospheric “The Same” envelops like a dense fog and the hypnotic “Pana-vision” weaves haunted piano and drums with Amnesiac strings, as the ethereal “Speech Bubbles” and the sci-fi sweep of “Waving a White Flag” create widescreen cinematic moments of orchestral beauty. There’s something here for fans of any era, but as a reference for longtime devotees, A Light for Attracting Attention bests The Eraser as Yorke’s finest non-Radiohead effort and falls somewhere amongst A Moon Shaped Pool and King of Limbs in terms of scope and daring. As such, diehards should be quite pleased with this release: an utterly satisfying set of songs that stands tall on its own, yet could easily climb the ranks against any of Radiohead’s late-era efforts. ― Allmusic