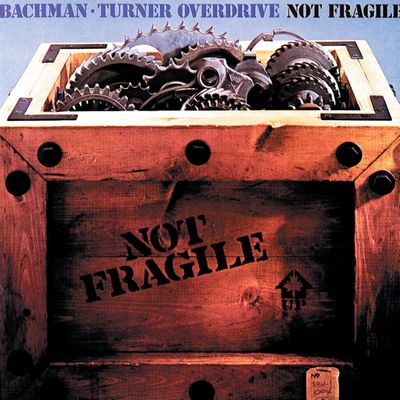 After gaining some recognition from the success of the band’s previous album, Bachman-Turner Overdrive got around to recording Not Fragile. Not only had one of the three Bachman brothers (Tim, the rhythm guitarist) left the band to BTO’s advantage, but Randy Bachman and C.F. Turner had clearly grown musically. To the album’s benefit, most of the material on Not Fragile are the band’s much-liked rock anthems, ranging from the hyper-distorted title track, through the famous but far more timid song “You Ain’t Seen Nothing Yet.” Indeed, for hard rock fanatics, it doesn’t come much better than on Not Fragile. Randy’s electrifying lead guitar is here more raucous than ever before, as are his rowdy vocals (particularly noticeable on the predictable, but fun “Sledgehammer”). The man steals the show on Not Fragile through his extensive and often astounding guitar solos. Generally, though, Bachman-Turner Overdrive are at their prime as a whole, both in songwriting and playing terms. As regards the mixing, it’s hard to find fault with this release. The drums are clear but not so prominent that they dominate the recording, while the guitars, along with the bass, are kept rigidly in their place. Not Fragile is one of the finest arena rock albums of the era, featuring all the hallmarks of what makes a classic release in the genre. Randy’s impressive guitar work and typically boisterous vocals complement the overall framework of the album superbly, as do the crunchy rhythm guitars. This release will astound fans of the genre and band, while those thoroughly against stadium rock may find something to convert their views. ― by Allmusic