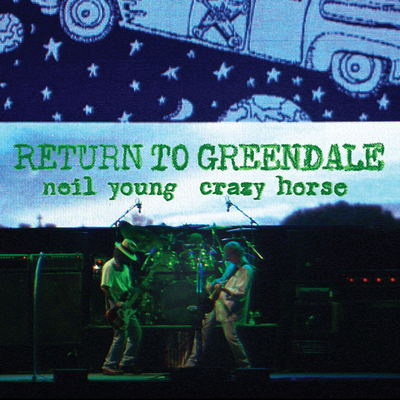 Greendale ranks as one of the more elaborate projects Neil Young ever conceived, a concept album inspired by Thornton Wilder’s Our Town which was accompanied by a film telling the record’s story — the film was then used as a backdrop for a theatrical production featuring Young and Crazy Horse. Nearly 20 years after the album’s 2003 release, Young revisited the project through the aptly titled Return to Greendale, a live effort capturing a September 4, 2003 concert held in Toronto just a few weeks after the August appearance of Greendale. Like the album proper, Return to Greendale has an elaborate accompaniment: Alongside the basic concert album there’s a box set that contains a Blu-Ray of the full concert, along with a DVD with the documentary Inside Greendale (previously released in a 2004 expansion of the album), not to mention LP and CD incarnations of the concert. As a live album, Return to Greendale is fairly straightforward: Young & Crazy Horse run through the ten songs on Greendale, giving them a ragged, spirited reading. The performances inject some life into the material, but the songs remain something of an elliptical ramble that circle around their point instead of tackling it straight on. There’s some ambling charm to Greendale, but Return to Greendale won’t convert doubters. Instead, it’ll play well to the album’s fans, as this sounds like a leaner, muscular version of the studio set. ― Allmusic