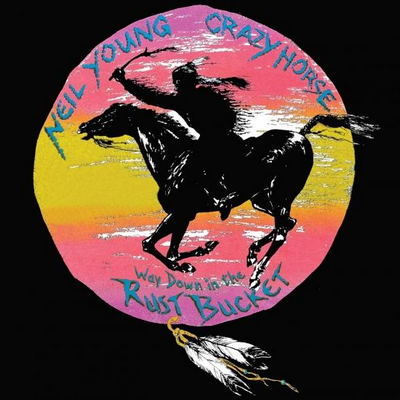 History shows us there are plenty of bands where the whole is more than the sum of the parts, and Neil Young & Crazy Horse are a great example of how the right combination of musicians can create a tide that lifts all boats. Though Crazy Horse never do anything especially complicated, the loose but thoroughly deep groove they generate fits Young’s musical ideas better than nearly any of his collaborators , and they give him the room to stretch out on guitar and make the most of his noisy explorations of melodic space; Young is rarely as inspired a soloist as he is with Crazy Horse, and they were in especially fine form on 1990’s Ragged Glory, where their laid-back thunder brought out some especially inspired performances after a string of inconsistent projects from Young in the ’80s. They were about to hit the road in support of the album when they played a pair of shows at The Catalyst, a 800-capacity club in Santa Cruz, California, to familiarize themselves with the material. Way Down in the Rust Bucket gives an authorized release to a previously bootlegged performance on November 13, 1990 when the group ambled through 19 songs in just under two-and-a-half hours. If it’s possible to rock hard and seem relaxed at the same time, that’s exactly the vibe that informs Way Down in the Rust Bucket. This doesn’t match the fire of the arena shows that followed (you can hear what they sounded like on 1991’s Weld), but Crazy Horse sound like they’re having a great time making their way through most of Ragged Glory and throwing in some favorites from their back catalog along the way (even more surprising than hearing three tunes from 1975’s Zuma is the appearance of two from 1981’s noisy and idiosyncratic Re-ac-tor). Way Down in the Rust Bucket sometimes sounds like the musicians are playing for themselves as much as the audience, suggesting a public rehearsal tape, and that actually works in its favor; Young and his bandmates aren’t pushing themselves especially hard, but they find the sweet spot in these songs and ride it for all its worth. Young was clearly having a great night on guitar, with Crazy Horse more than happy to help him out. Way Down in the Rust Bucket isn’t one of the more revelatory items to emerge from Neil Young’s archives since he began major excavation in the mid-2000s. However, for those who consider the joyous stomp of Neil Young & Crazy Horse rock & roll comfort food at its best, this is a feast to savor, a long and rollicking celebration of the pleasures of turning up the amps and inviting in the spirit. ― Allmusic