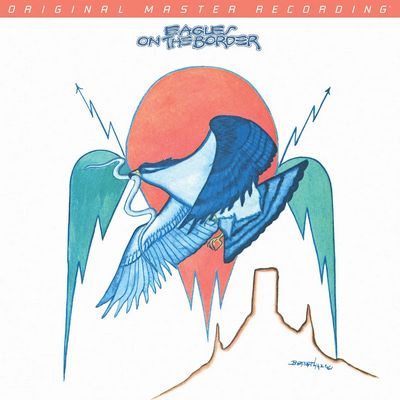 The Eagles began recording their third album in England with producer Glyn Johns, as they had their first two albums, but abandoned the sessions after completing two acceptable tracks. Johns, it is said, tended to emphasize the group’s country elements and its harmonies, while the band, in particular Glenn Frey and Don Henley, wanted to take more of a hard rock direction. They reconvened with a new producer, Bill Szymczyk, who had produced artists like B.B. King and, more significantly, Joe Walsh. But the resulting album is not an outright rock effort by any means. Certainly, Frey and Henley got what they wanted with “Already Gone,” the lead-off track, which introduces new bandmember Don Felder as one part of the twin guitar solo that recalls the Allman Brothers Band; “James Dean,” a rock & roll song on the order of “Your Mama Don’t Dance,” and “Good Day in Hell,” which is strongly reminiscent of Joe Walsh songs like “Rocky Mountain Way.” But the album also features the usual mixture of styles typical of an Eagles album. For example, “Midnight Flyer,” sung by Randy Meisner, is modern bluegrass; “My Man” is Bernie Leadon’s country-rock tribute to the recently deceased Gram Parsons; and “Ol’ 55” is one of the group’s well-done covers of a tune by a singer/songwriter labelmate, in this case Tom Waits. The title track, meanwhile, points the band in a new R&B direction that was later pursued more fully. Like most successful groups, the Eagles combined many different elements, and their third album, which looked back to their earlier work and anticipated their later work, was a transitional effort that combined even more styles than most of their records did. ― Allmusic