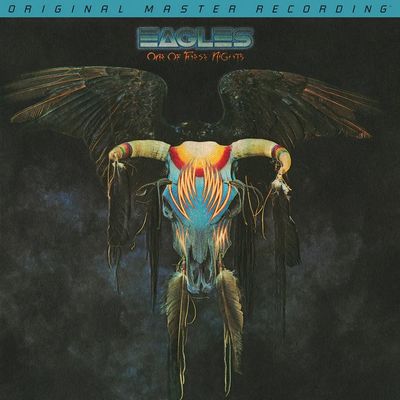 The Eagles recorded their albums relatively quickly in their first years of existence, their LPs succeeding each other by less than a year. One of These Nights, their fourth album, was released in June 1975, more than 14 months after its predecessor. Anticipation had been heightened by the belated chart-topping success of the third album’s “The Best of My Love”; taking a little more time, the band generated more original material, and that material was more polished. More than ever, the Eagles seemed to be a vehicle for Don Henley (six co-writing credits) and Glenn Frey (five), but at the same time, Randy Meisner was more audible than ever, his two lead vocals including one of the album’s three hit singles, “Take It to the Limit,” and Bernie Leadon had two showcases, among them the cosmic-cowboy instrumental “Journey of the Sorcerer” (later used as the theme music for the British television series The Hitchhiker’s Guide to the Galaxy). Nevertheless, it was the team of Henley and Frey that stood out, starting with the title track, a number one single, which had more of an R&B — even a disco — sound than anything the band had attempted previously, and continuing through the ersatz Western swing of “Hollywood Waltz” to “Lyin’ Eyes,” one of Frey’s patented folk-rock shuffles, which became another major hit. One of These Nights was the culmination of the blend of rock, country, and folk styles the Eagles had been making since their start; there wasn’t much that was new, just the same sorts of things done better than they had been before. In particular, a lyrical stance — knowing and disillusioned, but desperately hopeful — had evolved, and the musical arrangements were tighter and more purposeful. The result was the Eagles’ best-realized and most popular album so far. ― Allmusic