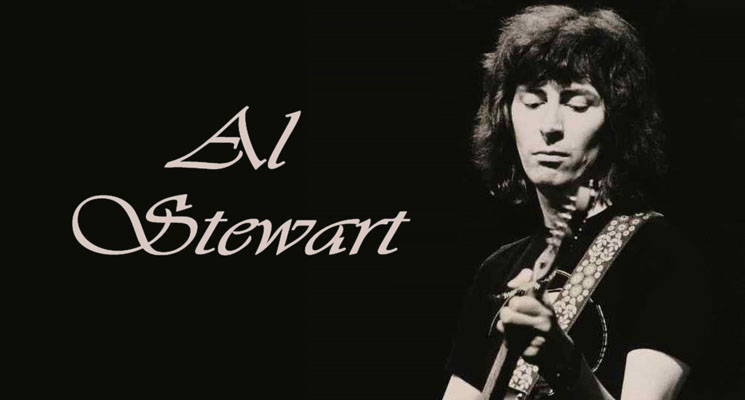 Scottish singer/songwriter Al Stewart has been an amazingly prolific and successful musician across 50 years, working in a dizzying array of stylistic modes and musical genres — in other words, he’s had a real career, and has done it without concerning himself too much about trends and the public taste. He’s been influenced by several notables, to be sure, including his fellow Scot (and slightly younger contemporary) Donovan, as well as Ralph McTell, Bob Dylan, and John Lennon — but apart from a passing resemblance to Donovan vocally, he doesn’t sound quite like anyone else, and has achieved his greatest success across four decades with songs that are uniquely his and impossible to mistake.

Stewart was born in Glasgow, Scotland, in 1945, and was swept up a decade later in the skiffle boom that took young Britons by storm — he decided to take up guitar after hearing Lonnie Donegan’s music. By the early ’60s, his family was living in Bournemouth, and he joined a local band, the Trappers, in 1963, and was already writing songs by that time. He was an admirer of the Beatles as their fame swept out of Liverpool and across the country, and even managed once to get backstage to meet John Lennon and play a few notes for him, at one of their Bournemouth performances. He studied guitar with Robert Fripp, no less, and later played keyboards in a band called Dave La Caz & the G Men, who managed to open for the Rolling Stones at the outset of the latter’s career in 1963. A true milestone for Stewart took place when Dave La Caz & the G Men recorded one of his songs, “When She Smiled,” in early 1964. ― Allmusic