Welcome to Long Beach 1971, the latest album in earMUSIC s Deep Purple reissue series that, over the last two years, has seen the release of rare live material from the band, including Stockholm 1970 , Paris 1975 and Graz 1975 .

It was recorded at Long Beach Arena in Long Beach, California, on July 30, 1971, and was broadcast on radio (KUSE 91.5 FM), a showcase for a support performance to Rod Stewart and The Faces.

An official release for a concert that has long been considered a landmark for the band, the set featured tracks ( Speed King and Child in Time ) from their fourth studio album, June 1970 s Deep Purple In Rock . This was a transitional release for the Mk II version of the band, being their first hard rock affair as well as their commercial breakthrough as the third leading über rock band of the day along with Black Sabbath and Led Zeppelin. Completing the set that day were a considerably extended version of Mandrake Root from their July 1968 debut album Shades Of Deep Purple , and Strange Kind Of Woman , the follow up single to Black Night from February 1971 (and an album track from the US iteration of July 1971 s Fireball LP). ― Amazon 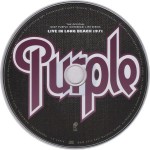