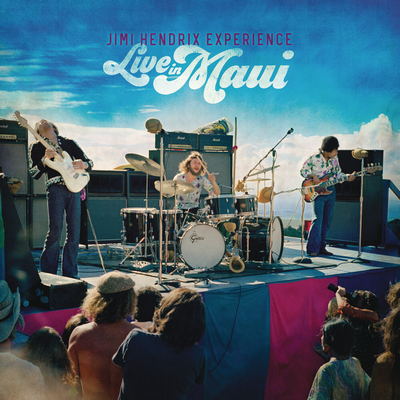 Just about everything about Jimi Hendrix’s performances in Maui, Hawaii, at the end of July in 1970 suggested they would likely be a train wreck. Hendrix’s manager had invested in an ill-fated film about hippie culture and expanded consciousness, and the production was going off the rails. Hoping to make the movie more saleable, the filmmakers eagerly agreed to stage a concert starring Hendrix that would appear in the film. (In a brave display of full hippie-era spaciness, the producers divided the audience for the concert by their astrological signs.) Playing for a few hundred flower children (when he was accustomed to appearing before several thousand) near a volcano while high winds interfered with the equipment and the flimsy stage was not exactly what Hendrix and his band were used to. However, they were seasoned pros, and Live in Maui presents in full the two sets they played before the cameras on July 30, 1970. These recordings document Hendrix and his accompanists — bassist Billy Cox and drummer Mitch Mitchell — as a well-oiled machine that delivered this material with a confidence and strength that also gave them room to stretch out without losing the plot. Hendrix delivers the guitar pyrotechnics that were his trademark, demonstrating his skills with a clear focus while using the swoops and cries of his Stratocaster to explore the outer limits of his songs. The Maui recordings don’t find him exploring much in the way of anything new, but he’s in excellent form, playfully relaxed and fully engaged at the same time, and Mitch Mitchell’s drumming is, as always, an excellent foil for Jimi’s melodies and instrumental attack, while Billy Cox’s subtle but solid bass anchors this music better than his predecessor, Noel Redding. Hendrix would die on September 18, 1970, and the fact this is among the very last shows he would perform (and the final one to be professionally recorded) certainly adds to the interest for many fans, but Live in Maui never sounds like an artist who is running out of gas. In some way, Jimi’s participation in “The Rainbow Bridge Vibratory Color-Sound Experiment” (as filmmaker Chuck Wein describes the event while he welcomes the band to the stage) was a goof, but he along with Mitchell and Cox saw to it that the folks on hand (and the camera crew) saw something worthwhile. Despite high winds, a rickety stage, and a small crowd, they delivered, and fans will revel in this document of late-period Hendrix in full flight. ― Allmusic