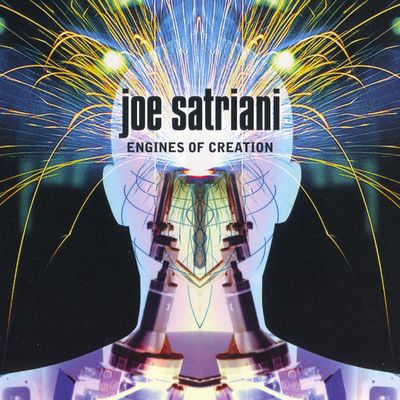 With Crystal Planet, Joe Satriani made an effective return to his signature sound following the erratic blues-rock detour of Joe Satriani. For the follow-up to Crystal Planet, Satriani is once again exploring novel territory in an effort to keep his music fresh, and Engines of Creation is the biggest stylistic shift he’s made yet — to electronic music. Satriani’s guitar is still the focal point of the music, to be sure, but while his virtuosity is obvious, it’s often submerged in the new demands of this musical idiom. That isn’t a surprise either, given that Satriani is one of the few guitar shredders whose taste and musicality have never been in question. But fans who simply want to hear him rip through his typical jaw-dropping solos may be disappointed (even though, in the end, there are more than a few solos), as will those guitar fans who reflexively disdain all sounds electronic. Having defended it, though, Engines of Creation isn’t a total success. While the music is certainly influenced by techno and electronica, it probably won’t appeal to listeners coming from those arenas; overall, it simply isn’t as adventurous as much genuine electronica, avoiding complex backing rhythms or edgy sonic textures; nor is it as hypnotic, meandering or drifting aimlessly at times instead of moving into trancelike states of consciousness. Plus, Satriani’s songs are often more traditional than they may seem upon first listen; many of the compositions are based on repeated themes and riffs and standard rock-song structures, switching between recurring, identifiable sections rather than gradually building and unfolding. However, the album can also be quite inventive. Satriani has challenged himself to find ways of coaxing totally new sounds from his guitar, and he weaves them seamlessly into the futuristic electronic soundscapes. Moreover, his melodies and main themes have rarely been this angular and off-kilter, meaning that exploring this music has indeed helped Satriani refresh and re-imagine his signature sound. Even the pieces that aren’t ultimately that revolutionary are still intriguing, since very few musicians have the technical training and innate sense of musicality required to mine this territory. Overall, Engines of Creation is a brave and sporadically successful experiment, and it’s also a promising new direction for Satriani should he choose to continue this vein of exploration and take it out even farther. ― Allmusic