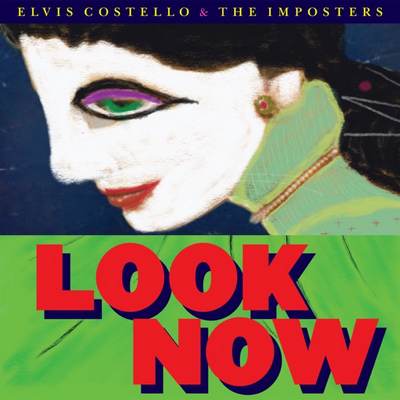 Elvis Costello had already taken a few steps from the “angry young man” persona that dominated his first two albums by the time he began work on 1982’s Imperial Bedroom, but that was the disc where his evolution from brash upsetter to gifted pop craftsman began in earnest. In 2017, Costello staged a concert tour in which he re-imagined the songs from that LP, and while that may or may not have put those tunes and their style back into his mind, 2018’s Look Now certainly is an extension of the mature and literate pop songwriting that he first fully embraced in that material. Look Now often feels like a cross between Imperial Bedroom and Painted from Memory, Costello’s 1998 collaboration with Burt Bacharach, and not just because Bacharach co-wrote three tracks with Costello. (Another pop tunesmith in the classic tradition, Carole King, also helped compose one of the tunes, “Burnt Sugar Is So Bitter.”) Look Now isn’t rock & roll so much as it’s pop that blends the craft of classic Brill Building tunes of the ’60s with the narrative maturity of classic Broadway musicals and the sort of ballads that were once the purview of classic jazz vocalists. If you’re the sort of Costello fan who lives in hope that he’s going to make another This Year’s Model or Blood & Chocolate someday, Look Now will not be your cup of tea. But if you’re in the mood for a set of world-class songs dealing with grown-up themes and performed with nuance and a master’s touch, you could hardly do better. As a vocalist, Costello’s phrasing and ability to inhabit a character has rarely been more assured, so much so that he sings a few songs from the point of view of a female protagonist and makes them work (including “He’s Given Me Things” and “Unwanted Number,” the latter written for the film Grace of My Heart). The arrangements are artful and evocative, with subtle applications of strings and backing vocalists and pianist Steve Nieve once again reminding us why he’s been one of Costello’s most valued musical partners since the late ’70s. And while there are just enough sharp angles in “Under Lime” and “Mr. & Mrs. Hush” to remind us this is indeed Elvis Costello, Look Now is the work of a man with enough talent to take his muse in any direction he pleases and give us something memorable. In 1978, the Arrogant Young Mr. Costello famously said, “I’m not going to be around to witness my artistic decline,” and 40 years on, Look Now proves he’s still living up to that claim. ― Allmusic