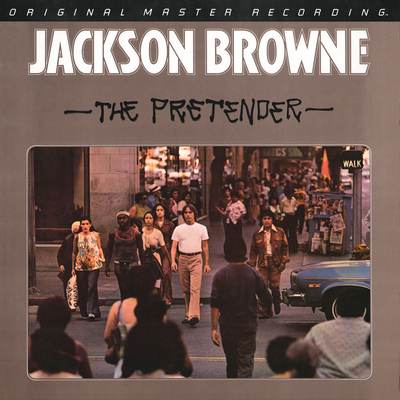 On The Pretender, Jackson Browne took a step back from the precipice so well defined on his first three albums, but doing so didn’t seem to make him feel any better. Employing a real producer, Jon Landau, for the first time, Browne made what sounded like a real contemporary rock record, but this made his songs less effective; the ersatz Mexican arrangement of “Linda Paloma” and the bouncy second half of “Daddy’s Tune,” with its horn charts and guitar solo, undercut the lyrics. The man who had delved so deeply into life’s abyss on his earlier albums was in search of escape this time around, whether by crying (“Here Come Those Tears Again”), sleeping (“Sleep’s Dark and Silent Gate”), or making peace with estranged love ones (“The Only Child,” “Daddy’s Tune”). None of it worked, however, and when Browne came to the final track — traditionally the place on his albums where he summed up his current philosophical stance — he delivered “The Pretender,” a cynical, sarcastic treatise on moneygrubbing and the shallow life of the suburbs. Primarily inner-directed, the song’s defeatist tone demands rejection, but it is also a quintessential statement of its time, the post-Watergate ’70s; dire as that might be, you had to admire that kind of honesty, even as it made you wince. ― Allmusic