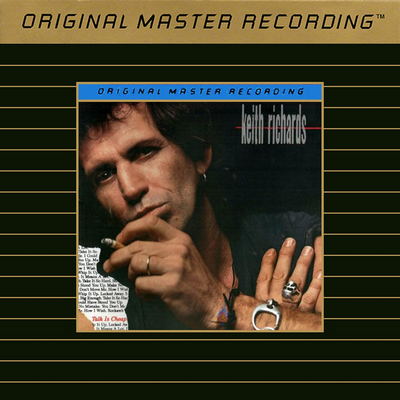 Keith Richards is not a man you want to be cross with you. After two decades of occasionally uneasy give and take between Richards and Mick Jagger, the Rolling Stones seemed on the verge of imploding when, after making himself scarce during the recording of 1986’s Dirty Work, Jagger made it clear he not only wasn’t going to tour with the band , but he was going to devote his time to promoting his second solo album, 1987’s Primitive Cool, including playing some shows on his own in Japan. If Jagger threw down a gauntlet, Richards could be said to have picked it up and slapped Mick hard with it, going into the studio to cut his solo debut, 1988’s Talk Is Cheap. To the surprise of absolutely no one, Talk Is Cheap often resembles a Rolling Stones album (“Take It So Hard” could pass for the best Stones single since “Start Me Up”), but part of its charm is that even when it strays far from the band’s template — such as the churning funk of “Big Enough” or the Chuck Berry tribute/rip-off “I Could Have Stood You Up” — it still beautifully captures what Richards brought to the band as a guitarist and songwriter, only in different surroundings and fresh contexts. It always sounds like Keith, even when it doesn’t sound like the Stones, and he’s passionate, engaged, and effortlessly cool on every track, with his trademark rhythm-as-lead guitar front and center throughout. The stellar band that accompanies Richards — including Waddy Wachtel, Steve Jordan, Mick Taylor, Bernie Worrell, Johnnie Johnston, and Ivan Neville — has a mind and an approach of its own, but they understand that the root of what Richards does is about the groove, and they don’t let him down for a moment. Talk Is Cheap was good, raucous, high-attitude fun in a way a Stones album hadn’t been since Tattoo You in 1981, and if Primitive Cool unwittingly revealed Mick Jagger wasn’t entirely sure what his musical identity was outside of the Stones, this album made it clear all Richards needed to do to make a good record was to be himself. ― Allmusic