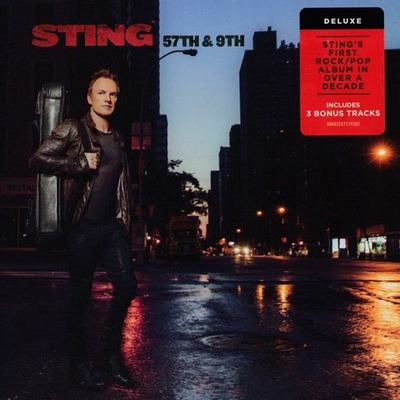 Sting seemed to tire of pop songs sometime early in the 21st century, wandering away from the format after 2003’s well-mannered Sacred Love. Over the next 13 years, he entertained his esoteric interests — he collaborated on a classical album, he rearranged his old tunes for an orchestra, he reunited the Police, he wrote a musical — before he returned to pop/rock with 2016’s 57th & 9th. The fact that he named this comeback album after the intersection he crossed on his way to the studio speaks to the workmanlike aspect of 57th & 9th: there is no grand concept, no unifying aesthetic — it’s merely a collection of pop songs. This is hardly a bad thing. Sting has often undervalued his skills as a craftsman, so hearing him deliver ten sharply crafted songs is appealing. Playing with a studio band featuring drummer Josh Freese and guitarist Lyle Workman, Sting manages to work up a head of steam on occasion — “I Can’t Stop Thinking About You” opens the album with an insistent pulse, “Petrol Head” evokes memories of “Synchronicity II” — but he spends as much time delivering tunes with a delicate touch. Much of the last half of the record is devoted to introspection, but unlike the fussy Sacred Love, the ballads here benefit from a brighter, open production and a singer/songwriter who feels invested in sculpting his melodies with the same care that he gives his lyrics. Sting sifts through familiar territory with songs of protest sitting alongside songs of yearning and love, and it all adds up to record that’s simultaneously unassuming and revealing: through its modest nature, 57th & 9th stands as a testament to Sting’s inherent gifts as a songwriter and record-maker. ― Allmusic