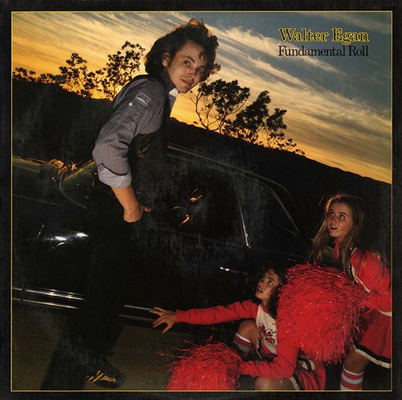 With an album cover that would make R. Kelly blush, (Egan appears on back cover getting frisky with a couple of high school cheerleaders) Fundamental Roll, the debut album from 70s one hit wonder Walter Egan proves that he was in fact much more than that. Initially Egan was interested in having Brian Wilson or Todd Rundgren produce his debut, but when neither became available his friend/engineer Duane Scott (who had worked with Egan on his previous band Wheels) suggested he get in touch with Lindsey Buckingham of Fleetwood Mac. At the time Fleetwood Mac was riding their wave of success from the ‘White Album’ and Lindsey was looking to cut his teeth in the studio as a producer. Buckingham enlisted fellow Fleetwood Mac member/ex-flame Stevie Nicks into the recording sessions to sing back up on six of the eleven tracks. The combination of Egan’s warm soulful vocals coupled with Buckingham and Nicks gorgeous harmonies is undeniably great (the same formula would eventually give Egan his biggest success with 1978’s “Magnet and Steel”). Dean Torrence of Jan and Dean fame also appears on backup vocals on the song “She’s So Tough”. But again its the chemistry between Walter, Lindsey, and Stevie that makes the record work and work well with such instantly catchy songs as the summertime pop of “Only The Lucky”, the warm soft rock groove of “Won’t You Say You Will”, and the steamy “Yes I Guess I Am.” Fundamental Roll is some of the best California Rock ever to be laid down on tape and is essential for fans of the Buckingham/Nicks version of Fleetwood Mac, who will feel right at home with Walter’s perfect mesh of catchy pop rock, soothing soft rock, and infectious mid 70s country rock. ― Allmusic