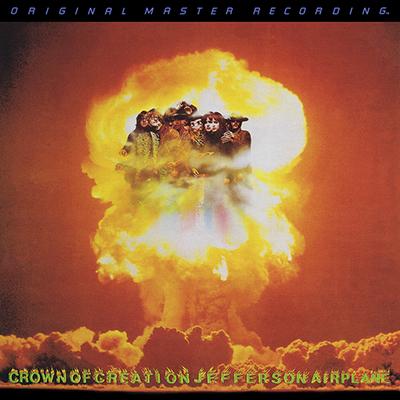 Crown of Creation appeared ten months after their last album, After Bathing at Baxter’s, and it doesn’t take the same kind of leap forward that Baxter’s did from Surrealistic Pillow. Indeed, in many ways, Crown of Creation is a more conservative album stylistically, opening with “Lather,” a Grace Slick original that was one of the group’s very last forays (and certainly their last prominent one) into a folk idiom. Much of what follows is a lot more based in electric rock, as well as steeped in elements of science fiction (specifically author John Wyndham’s book The Chrysalids) in several places, but Crown of Creation was still deliberately more accessible musically than its predecessor, even as the playing became more bold and daring within more traditional song structures. Jack Casady by this time had developed one of the most prominent and distinctive bass sounds in American rock, as identifiable (if not quite as bracing) as John Entwistle’s was with the Who, as demonstrated on “In Time,” “Star Track,” “Share a Little Joke,” “If You Feel” (where he’s practically a second lead instrument), and the title song, and Jorma Kaukonen’s slashing, angular guitar attack was continually surprising as his snaking lead guitar parts wended their way through “Star Track” and “Share a Little Joke.” The album also reflected the shifting landscape of West Coast music with its inclusion of “Triad,” a David Crosby song that Crosby’s own group, the Byrds, had refused to release — its presence (the only extant version of the song for a number of years) was a forerunner of the sound that would later be heard on Crosby’s own debut solo album, If I Could Only Remember My Name (on which Slick, Paul Kantner, and Casady would appear). The overall album captured the group’s rapidly evolving, very heavy live sound within the confines of some fairly traditional song structures, and left ample room for Slick and Marty Balin to express themselves vocally, with Balin turning in one of his most heartfelt and moving performances on “If You Feel.” “Ice Cream Phoenix” pulses with energy and “Greasy Heart” became a concert standard for the group — the studio original of the latter is notable for Slick’s most powerful vocal performance since “Somebody to Love.” And the album’s big finish, “The House at Pooneil Corners,” seemed to fire on all cylinders, their amps cranked up to ten (maybe 11 for Casady), and Balin, Slick, and Kantner stretching out on the disjointed yet oddly compelling tune and lyrics. It didn’t work 100 percent of the time, ― Allmusic