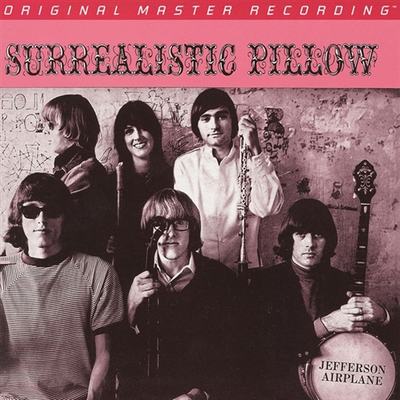 The second album by Jefferson Airplane, Surrealistic Pillow was a groundbreaking piece of folk-rock-based psychedelia, and it hit like a shot heard round the world; where the later efforts from bands like the Grateful Dead, Quicksilver Messenger Service, and especially, the Charlatans, were initially not too much more than cult successes, Surrealistic Pillow rode the pop charts for most of 1967, soaring into that rarefied Top Five region occupied by the likes of the Beatles, the Rolling Stones, and so on, to which few American rock acts apart from the Byrds had been able to lay claim since 1964. And decades later the album still comes off as strong as any of those artists’ best work. From the Top Ten singles “White Rabbit” and “Somebody to Love” to the sublime “Embryonic Journey,” the sensibilities are fierce, the material manages to be both melodic and complex (and it rocks, too), and the performances, sparked by new member Grace Slick on most of the lead vocals, are inspired, helped along by Jerry Garcia (serving as spiritual and musical advisor and sometimes guitarist). Every song is a perfectly cut diamond, too perfect in the eyes of the bandmembers, who felt that following the direction of producer Rick Jarrard and working within three- and four-minute running times, and delivering carefully sung accompaniments and succinct solos, resulted in a record that didn’t represent their real sound. Regardless, they did wonderful things with the music within that framework, and the only pity is that RCA didn’t record for official release any of the group’s shows from the same era, when this material made up the bulk of their repertory. That way the live versions, with the band’s creativity unrestricted, could be compared and contrasted with the record. The songwriting was spread around between Marty Balin, Slick, Paul Kantner, and Jorma Kaukonen, and Slick and Balin (who never had a prettier song than “Today,” which he’d actually written for Tony Bennett) shared the vocals; the whole album was resplendent in a happy balance of all of these creative elements, before excessive experimentation (musical and chemical) began affecting the band’s ability to do a straightforward song. The group never made a better album, and few artists from the era ever did. ― Allmusic