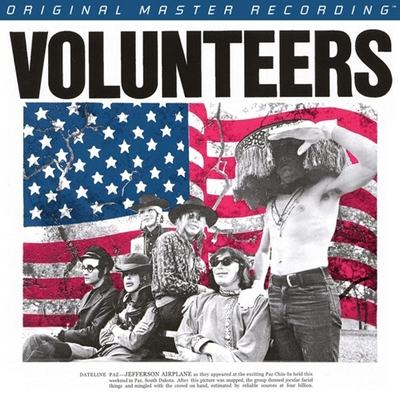 Controversial at the time, delayed because of fights with the record company over lyrical content and the original title (Volunteers of America), Volunteers was a powerful release that neatly closed out and wrapped up the ’60s. Here, the Jefferson Airplane presents itself in full revolutionary rhetoric, issuing a call to “tear down the walls” and “get it on together.” “We Can Be Together” and “Volunteers” bookend the album, offering musical variations on the same chord progression and lyrical variations on the same theme. Between these politically charged rock anthems, the band offers a mix of words and music that reflect the competing ideals of simplicity and getting “back to the earth,” and overthrowing greed and exploitation through political activism, adding a healthy dollop of psychedelic sci-fi for texture. Guitarist Jorma Kaukonen’s beautiful arrangement of the traditional “Good Shepherd” is a standout here, and Jerry Garcia’s pedal steel guitar gives “The Farm” an appropriately rural feel. The band’s version of “Wooden Ships” is much more eerie than that released earlier in the year by Crosby, Stills & Nash. Oblique psychedelia is offered here via Grace Slick’s “Hey Frederick” and ecologically tinged “Eskimo Blue Day.” Drummer Spencer Dryden gives an inside look at the state of the band in the country singalong “A Song for All Seasons.”
The musical arrangements here are quite potent. Nicky Hopkins’ distinctive piano highlights a number of tracks, and Kaukonen’s razor-toned lead guitar is the recording’s unifying force, blazing through the mix, giving the album its distinctive sound. Although the political bent of the lyrics may seem dated to some, listening to Volunteers is like opening a time capsule on the end of an era, a time when young people still believed music had the power to change the world. ― Allmusic