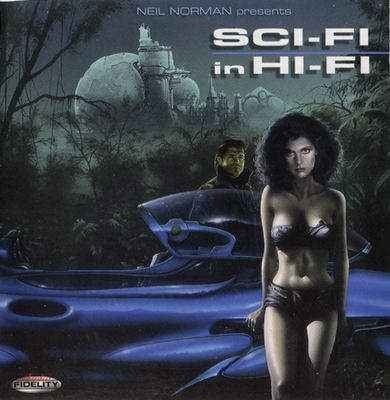 Whether in its original serial form in the 1940s, in the low-budget films of the 1950s, in the television series of the 1960s, or even in the overgrown re-imaginings for blockbuster movies in the 1970s and beyond, the science-fiction genre on film (and videotape) has always had something cheesy about it, and that is part of its appeal. Even when the technical wizards at director George Lucas’ Industrial Light and Magic are dreaming up the next Star Wars movie, there is, at heart, a sense of the earliest, silliest versions of the genre still present. In that spirit come Neil Norman’s souped-up and synthesized treatments of the various scores for sci-fi films and TV series. Norman lists a raft of acoustic orchestral musicians in the credits, but their names are in smaller print than those of the guitarists and keyboard players who are the real driving force behind these excerpts from Star Trek, Star Wars, and many other similar efforts. Even in SACD fidelity, this is space music on the cheap. And Norman and his crew are better on the more synth-pop stuff; they nearly fall apart when trying to negotiate Richard Strauss’ Also Sprach Zarathustra (sorry, “2001: A Space Odyssey”). This is, however, just the thing to play over the P.A. system at the next sci-fi fan festival at a local motel, that is, if Norman himself hasn’t been contracted to play live. ― Allmusic