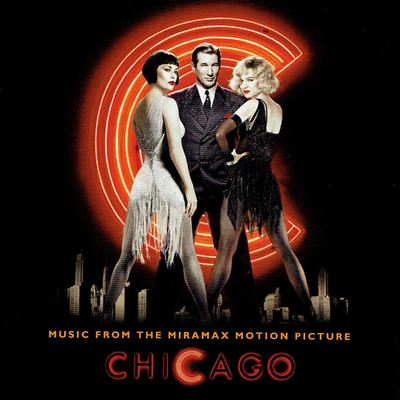 Maurine Watkins’ satirical play Chicago has gone through several permutations since it opened at the Music Box Theatre on Broadway on December 30, 1926. There was a silent movie version in 1927, followed by a sound film called Roxie Hart starring Ginger Rogers in 1942. In 1975, director/choreographer Bob Fosse and the songwriting team of John Kander and Fred Ebb brought a darker vision to the story of a murderess who achieves acquittal due to publicity and slick lawyering, and their musical ran 898 performances back on Broadway. But the show really came into its own in 1996 when, in the wake of the O.J. Simpson trial, a revival was mounted that was still running on Broadway six years later when this movie version of the musical was released. The story and setting are perfect for Kander & Ebb, who delight in using musical pastiches of the interwar era to underlie a deeply pessimistic world view in such works as Cabaret. Indeed, listeners will be much reminded of that earlier score by this one, in which each character gets one or more hot jazz-style numbers to illuminate his or her villainy. What may surprise listeners is how effective the principals — Renée Zellweger, Catherine Zeta-Jones, Richard Gere, and John C. Reilly — are, given that none of them are known for their singing abilities. Modern studio techniques can do wonders, of course, making actual dubbing virtually unnecessary, but the actors really throw themselves into these performances. Less impressive are the extraneous songs (not actually featured in the film) tacked on at the end, presumably to expand the album’s commercial appeal, including a rap by Queen Latifah (who co-stars in the film) and Lil’ Kim, and a musically irrelevant dance tune by Anastacia that wasn’t even written by Kander & Ebb. ― Allmusic