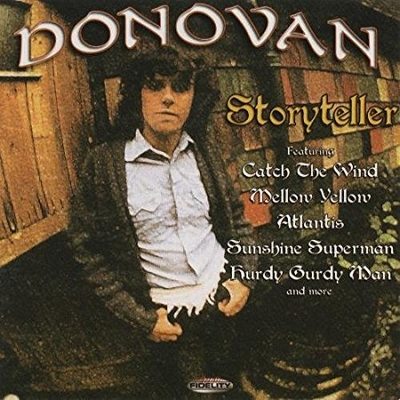 Storyteller is a compilation album from Scottish singer-songwriter Donovan. It was released on September 16, 2003 (Audio Fidelity 015) and was the first Donovan album released as a Super Audio CD/CD hybrid. END_OF_DOCUMENT_TOKEN_TO_BE_REPLACED While by no means a complete retrospective, this two-disc compilation contains a healthy sampling from Donovan’s first dozen years as a formidable musical figure. His chameleon-like sensibilities not only adapted to, but likewise defined the ’60s folk, pop, acid rock and the scene of swingin’ London. As well as hitting some of the more obvious high points, Donovan — who personally oversaw the project — included a couple of unissued demos (“London Town”/”Codine”), alternate versions (“Museum”/”Superlungs”/”Riki Tiki Tavi”) and previously unearthed titles (“Breezes Of Patchulie”/”Age Of Treason”/”What The Soul Desires”) END_OF_DOCUMENT_TOKEN_TO_BE_REPLACED