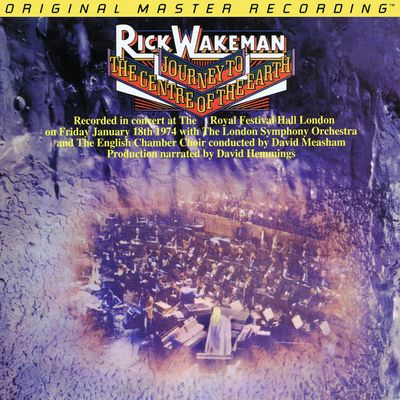 Journey to the Centre of the Earth is one of progressive rock’s crowning achievements. With the help of the London Symphony Orchestra and the English Chamber Choir, Rick Wakeman turns this classic Jules Verne tale into an exciting and suspenseful instrumental narrative. END_OF_DOCUMENT_TOKEN_TO_BE_REPLACED This Greatest Hits double-disc release is both utterly deceiving and painfully disappointing, since its tracks are made up of fabricated instrumental pieces of Rick Wakeman’s album cuts. Played by Wakeman, the songs are glossed-over remakes that may be true to their original note form, but are not the actual tracks from their previously released albums. Coming off like synthesized Muzak, popular favorites such as “Merlin the Magician,” “The Journey,” and Yes’ “Starship Trooper” lack depth, color, or energy, with only their familiar rhythms and melodies remaining END_OF_DOCUMENT_TOKEN_TO_BE_REPLACED A deluxe version of one of the classic ‘concept’ Prog albums of all time and Rick Wakeman’s second. Re-mastered with bonus tracks and a Quad mix from the time. Long out of print, the A&M Rick Wakeman catalogue is highly sought after by fans, this is one of the first in a re-issue campaign to restore the Rick Wakeman catalogue back to its former glory. This release includes a 1-CD re-mastered at Abbey Road and a DVD featuring the album in Quad and stereo. END_OF_DOCUMENT_TOKEN_TO_BE_REPLACED