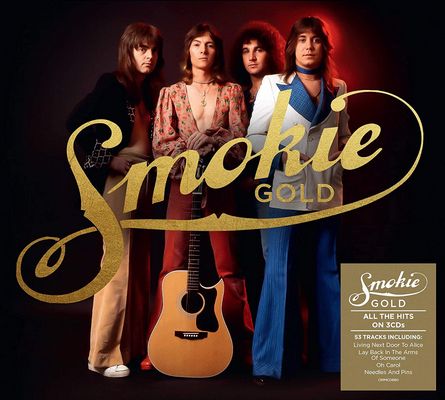 UK three CD set, the only Smokie compilation you’ll ever need. Formed in Bradford, Yorkshire, Smokie rose to fame in the 1970s and found chart success with their signature glam-pop sound. This career compilation includes all of the group’s biggest hits including ‘Living Next Door To Alice’, ‘It’s Your Life’, ‘ Oh Carol’, ‘Lay Back In The Arms Of Someone’ and ‘Have You Ever Seen The Rain’ END_OF_DOCUMENT_TOKEN_TO_BE_REPLACED The English glam rock band was fronted by Chris Norman, who became known to American audiences for his duet with Suzi Quatro, “Stumblin’ In”, which became a top chart hit around the world. But Smokie was most popular in Europe in the late 1970’s with hits like “Laying Back in the Arms of Someone”, “Don’t Play Your Rock N Roll to Me”, their cover of “Needles And Pins” and “Living Next Door to Alice” (which features the “F” word uncensored and stayed that way even when performed on television) END_OF_DOCUMENT_TOKEN_TO_BE_REPLACED