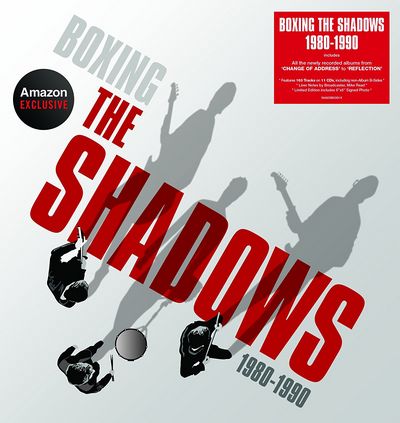 The Shadows remain one of the most prolific bands of the last 60 years. They had 31 hit singles (plus 30 with Cliff Richard), which include 16 Top 10 hits (plus 25 more with Cliff), 5 No. 1 hits (plus 7 with Cliff). They’ve also spent 361 weeks on the albums chart (plus another 400+ with Cliff), selling tens of millions of records since 1958, and defining the sound that influenced many of the world’s greatest guitarists. The Shadows achieved a phenomenal run of hit albums throughout the 1960s/70s, with their last two reaching the No. 1 spot. In 1980 they moved to a new label, Polydor, where during a ten-year association they would produce an additional eleven albums. END_OF_DOCUMENT_TOKEN_TO_BE_REPLACED To be fair, this six-CD set is really for completists only, since the price tag is likely to put off anyone else. But if you’ve been hooked on the beautiful guitar work of Hank Marvin and the surprisingly muscularity of the band, delving deeper is a very good idea. Not only do you get all the big hits — like “Apache,” “F.B.I.,” and “The Rise and Fall of Flingel Bunt” (or even the wonderfully named “I Wish I Could Shimmy Like My Sister Arthur”) — you get literally everything. END_OF_DOCUMENT_TOKEN_TO_BE_REPLACED