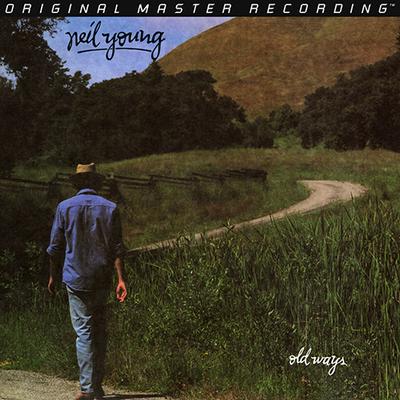 In 1984, Geffen Records sued Neil Young on the grounds that he had submitted uncharacteristic, uncommercial records to the label. By the time a settlement had been reached, Young had been on the road with a country band called the International Harvesters for over a year and recorded a revamped version of Old Ways, a 1982 recording originally rejected by Geffen that was cut in the style of Harvest and Comes a Time, but with a stronger country leaning. Young depends heavily on friends, especially for vocals — Waylon Jennings sings harmony on six out of the ten tracks, and one of the others is a duet with Willie Nelson. Though populated by cowboys and country references, Young’s take on the genre is typically idiosyncratic, including a reworked version of his autobiography in “Get Back to the Country,” a cover of the 1956 Gogi Grant hit “The Wayward Wind,” and the uncategorizable “Misfits,” which portrays astronauts watching Muhammad Ali fights on television in space. Old Ways is not a great Neil Young album and at the time of its release served to alienate him even further from his audience, but it has its moments. ― Allmusic