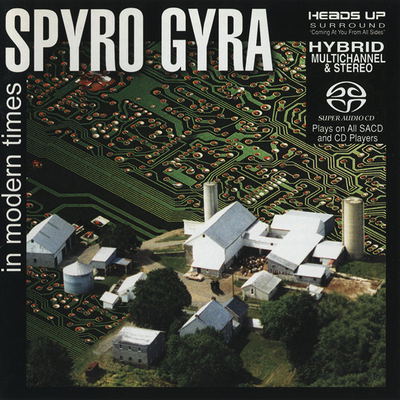 When you consider that 1979 was the year that launched Spyro Gyra onto the pop charts with their number one hit “Morning Dance,” for what was essentially a new style of jazz, their achievements seem all the more astounding. With the release of In Modern Times, the group commemorates 25 years of recording and a move to Heads Up International with this fresh, new collection. The enhanced CD, complete with a video and biography, features the talents of its co-founder, Jay Beckenstein, on saxophones, Tom Schuman on keyboards, Julio Fernandez on guitars, Scott Ambush on bass, and Joel Rosenblatt on drums. The 12 original concepts written by members of the group, the inimitable Chuck Loeb, and co-writers Jeremy Wall and Phil Magallanes, keep the listening interesting, sweet, and real. The opening track, “After Hours,” is a sultry tune featuring orchestral enhancement, subtle horn charts, and creates a mood that signals the listener is in for a great time. Their retro soul tribute to Grover Washington, Jr., ” “Groovin’ for Grover” features an excellent soprano saxophone melody by Jay Beckenstein and glistens brilliantly among this great array of contemporary jazz gems. The crown jewel, however, is “Florida Straits,” a fiery, danceable, Latin jam. Beckenstein’s sax playing lights a fire under Julio Fernandez’ Carlos Santana-influenced guitar riffs, who cuts loose on a solo that sets the song ablaze. Along with percussionist David Quarles and drummer Joel Rosenblatt, this descarga helps to set In Modern Times apart from previous chart makers by Spyro Gyra. Another great song is “East River Blue,” which features the bluesy bop and soulful resonance of Beckenstein’s sax lines and the excellent B-3 organ solo by Tom Schuman. This enhanced CD is dynamic and flows as if self-propelled because of the superior technology, well-written songs, tight horn charts, eclectic grooves, and exceptional contemporary jazz, fusion, and R&B-based performers who mix various elements into a bold, modern sound. ― Allmusic