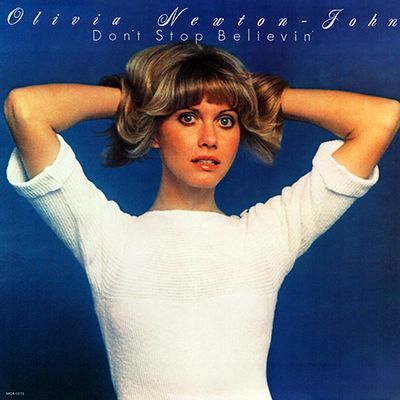 The 1976 edition of Olivia Newton-John continues the positive vibe that Have You Never Been Mellow initiated, and though the title track hit number one on the adult contemporary charts, it, surprisingly, failed to go higher than Top 30 pop. A shame because exactly five years later a different song with the exact same title and sentiment went Top Ten for Journey; the comparison is appropriate because Don’t Stop Believin’ is one of the slickest of Newton-John’s country pop releases. Despite the extra gloss producer John Farrar put on this, it still retains some of the warmth of earlier Newton-John projects while making that inevitable pitch to the ’70s record buying public. “New Born Babe” contains elegant musicianship, while Bruce Welch’s “Hey Mr. Dreammaker” is bouncy country — the antithesis of Gary Wright’s “Dream Weaver,” which was released, not so coincidentally, the same year. That Gary Wright, Olivia Newton-John, and Journey influenced each other’s works, even if just thematically, says something about that period in music, but the real oddity here is Chris Christian showing up co-writing “Compassionate Man” with producer Farrar. The highly touted Christian pop singer was supposed to cross over as big as Christopher Cross, but made hardly a dent in the pop consciousness of the time. Like his career, the contribution here is not going to overwhelm anyone, though it’s not bad either. The Don Black/Hank Marvin/John Farrar composition “Sam” works much better, and hit the Top 20, as well as gaining number one adult contemporary status, in early 1977. Despite the silly rhyme á la Elton’s John’s plane & Spain in “Daniel,” “Sam” (you know where I am) boasts a gorgeous conclusion with soaring music that drove it higher on the pop charts. That Olivia didn’t cover more Marvin, Welch & Farrar is a mystery, though 60 percent of Don’t Stop Believin’ is comprised of a song written by one or more of that trio, a unique incident and worthy of note. That she and Cliff Richard only had one duet that was a hit, four years after this release, is a pity. So many individuals involved in her music came from Cliff Richard and the Shadows, which created an opportunity for this album to be more than it is. As the new wave was breaking, this highly commercial artist would have been viewed as more hip, broadening her appeal, had she embraced her Cliff Richard & the Shadows heritage. Nonetheless, the title track, like the song “Come On Over,” which preceded it by five months, is one of her best moments, and as “Come On Over” should have had a lengthier stay at the top of the charts, the same goes for “Don’t Stop Believin’.” Both “Magic” and the song “Physical” accomplished what these songs should have — sustained dominance of the pop charts. They came from albums that were even more slickly produced than this. Don’t Stop Believin’ is almost the mid-point in her chart reign, the 11th and 12th out of 28 Top 40 hits, and it is a transition period, as the soundtrack phase of her career kicked in after this. ― Allmusic