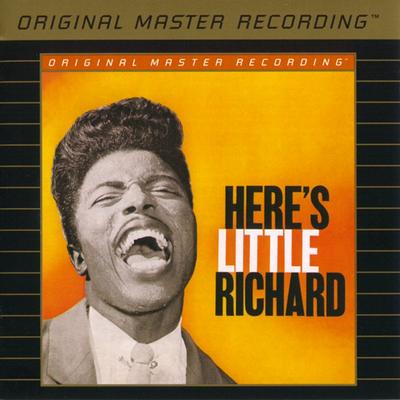 The audiophile label Mobile Fidelity Sound Labs is known for their meticulously mastered and manufactured reissues of back catalog albums, but they generally seem more interested in classic jazz and rock from the ’70s onward than first generation rock & roll, which makes their two-fer reissue of Little Richard’s first two albums for Specialty such a pleasant surprise. While fans have been accustomed to hearing the 24 classic tunes on this disc on reissues sourced from tapes many generations down from the originals (and often in fake stereo), MFSL have remastered these tracks in glorious mono, with decades of aural grime buffed away, and the results are impressive. On many of these songs, despite the single channel sound sources, it’s easier than ever before to hear the details separating Richard from his band, and the audio (mostly recorded by the great Cosimo Matassa at his J&M Studios in New Orleans) is straightforward but full of depth, with the bass and drums swinging gloriously, the piano rolling like the Mississippi River, and the horns pealing with joy. And as music, this disc is a near-peerless introduction to Little Richard’s early work; he rarely topped the fire and strength of these sessions, and most of his biggest and best hits are on board, including “Tutti Frutti,” “Lucille,” “The Girl Can’t Help It,” “Rip It Up,” “God Golly, Miss Molly” and lots more. Given that MFSL have pressed this on a multi-layer gold CD with both standard and SACD functionality, this is a much pricier item than most single-disc Little Richard collections, but the material here has never sounded quite this good on compact disc, and the music is superb — fans of first era rock with an taste for high fidelity will find this release to be a major kick on both levels. ― Allmusic