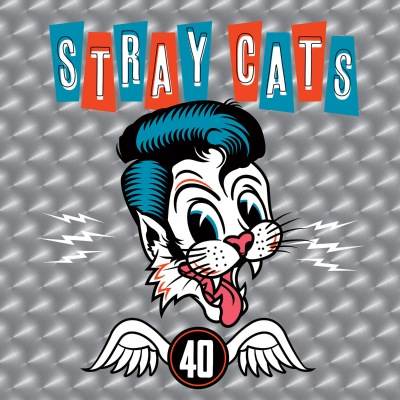 Stray Cats are no strangers to reunions. They had their first in 1986, when they only had been separated for a few years, and then another one a few years later, finally calling it a day after Choo Choo Hot Fish, a Dave Edmunds production that made few waves in 1992. Released 27 years after that quiet farewell, 40 finds these former young guns staring down their sixties by staying true to the music that was old-fashioned when they took it up the charts in 1981. Back then, their retro rockabilly moves stood as a nervy rebuke to the stylized synth pop and new wave burning up the underground, but the only way 40 could be seen as a disruption is to the stable lives Brian Setzer, Slim Jim Phantom, and Lee Rocker cultivated in the nearly three decades since their last record. Saving the occasional horndog lyric from Setzer, at no time does the trio attempt to sound younger than their years, which is naturally to their benefit. Comfortable in their skin and still intoxicated by a big rockabilly beat, the Stray Cats sound vigorous and sly — a bit louder and heavier, possibly slightly slower, than before, but also unconcerned with the kind of modern fashion that tainted their records after Rant N Rave. What makes 40 work is the same thing that made Built for Speed click: the trio has absorbed all the nuances of rockabilly, so they can enliven it with their own swing and sense of humor. It’s this bold personality that keeps 40 cooking. Stray Cats spit out allusions to their idols and classic oldies, nod at surf rock and country mythos, play a few blues shuffles, and generally have a whale of a good time. It’s notable that these high spirits are evident on a reunion album because they were largely absent on the trio’s previous reunions: this time, it sounds like the group is in it for fun, and that makes a huge difference. ― Allmusic