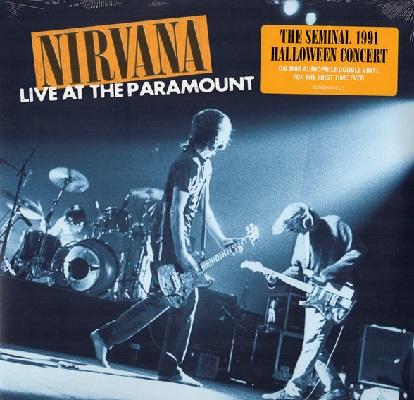 It’s said that the pre-Nevermind Kurt Cobain liked to tell people he intended to be a rock star, but a look at what happened later suggests either stardom was a great deal different than he expected, or that he really didn’t imagine he was ever going to become multi-platinum-level rich and famous. If Nevermind wasn’t exactly the sound of a happy man, it also had a vitality and brio that were replaced by a haunted, spectral undertow on In Utero and MTV Unplugged in New York. Given how people love to make a great deal of Cobain’s fondness for the Beatles , Nirvana’s Live at the Paramount could be said to be his corollary to John Lennon’s performance in the movie A Hard Day’s Night, both of which captured the artists at a moment where success was a pleasure, just before it became a burden. Live at the Paramount was recorded at a hometown show in Seattle on Halloween 1991, about five weeks after Nevermind had been released and just a few days before the album unexpectedly crashed into the Top 40 of the album charts. Playing a packed house as they suddenly went from grunge underdogs to the kings of the hill, Nirvana sound tight, confident, and powerful in these recordings, tearing through the bulk of both Nevermind and Bleach with the agility of a sprinter hitting their stride. Cobain’s vocals and guitar work are on point, spontaneous, and in the moment but landing their marks with vigor, while Krist Novoselic and Dave Grohl nail the rhythms with a gleeful lack of mercy. While the set gets off to a subdued start with a cover of the Vaselines’ “Jesus Doesn’t Want Me for a Sunbeam,” the second tune, “Aneurysm,” finds the band shifting into fourth gear, and while the pace ebbs and flows, they maintain a tight focus throughout and play the sort of show that earned them their reputation as they toured behind the comparatively muddy and scattershot Bleach. Live at the Paramount may not feature the best recorded Nirvana gig — Live at Reading has the edge — but there is a fire and a noisy joy in this set that they would very rarely achieve again. This captures Nirvana as a kick-ass rock band on a great night, not as the unexpected Voices of a Troubled Generation that they were forced to become. And that makes a very, very big difference. ― Allmusic