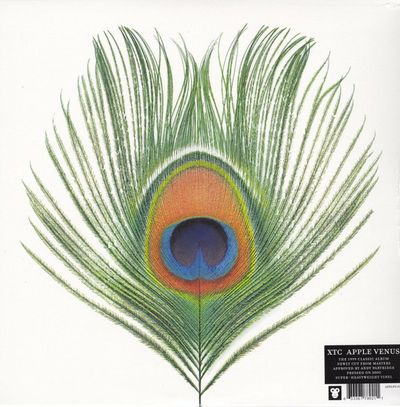 Seven years is a long time between records, so it shouldn’t come as a surprise that Apple Venus is a significant step forward from Nonsuch, but the sparse strings and circular arrangements of “River of Orchids” nevertheless come as a shock, especially since its slow build-up feels as ominous and intellectual as 20th century classical music. It provides the keynote for the album, setting the stage for an ambitious, unpredictable, and strangely beautiful record. Although there are similarities with the pastoral Skylarking or parts of Nonsuch, there is really no comparable record in XTC’s canon, given its sustained mood, experimentalism, and glimpses of confession. Colin Moulding wrote the brightest tunes on the record, and while the bouncy “Frivolous Tonight” and “Fruit Nut” will be endearing to any longtime XTC fan, they don’t fit the tone of Apple Venus, which feels like an Andy Partridge solo album — not just a confessional, but a grand outpouring of ideas. Partridge insisted that Apple Venus be released in two parts — guitarist Dave Gregory left partially because he believed the album would be stronger if it was consolidated to one record — presumably because all his songs on Pt. 1 are of a piece, sharing similar lyrical and musical themes. Split between orchestral and acoustic pop, Apple Venus is alternately lush and melancholy, sometimes within one song. Some of Partridge’s darkest work is here, such as the vindictive “Your Dictionary,” yet the album overall has a hopeful note — the perfect aural encapsulation of their long, bitter struggle of the ’90s. The strike was frustrating for the band and fans alike, but perhaps the extended layoff paid off in sharpening Partridge’s focus, since Apple Venus, Pt. 1 easily ranks as one of XTC’s greatest works. ― Allmusic