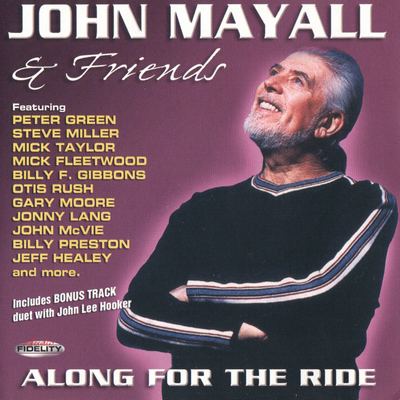 By the time this was released in 2001, John Mayall was more known for the people who played in his seminal British band, the Bluesbreakers rather than his own accomplishments. The success of 1999’s Padlock on the Blues afforded Mayall the opportunity to fulfill his dreams and gather an all-star lineup of blues and rock luminaries. “A World of Hurt” and “That’s Why I Love You So” both typify the good but not great groove that permeates Along for the Ride. Better tracks “Yo Yo Man” and “Early in the Morning” are easygoing blues that feature the great rhythm section of John McVie and Mick Fleetwood. Fellow Fleetwood Mac and Bluesbreaker alum, the reclusive Peter Green plays acoustic slide guitar on “Yo-Yo Man.” “So Many Roads” has Mayall dueting with Otis Rush, and it soon becomes a contest on who sounds more disgruntled. The playful “Testify” features vocals and subtle guitar lines from blues phenom Shannon Curfman. This ends on the strong note. The powerful and wry “She Don’t Play By the Rules” has Mayall with arguably the strongest and most subtle band with Mick Taylor on lead guitar and Andy Fairweather Low on acoustic guitar. Along for the Ride is produced, engineered, and mixed by David Z. Despite the camaraderie, a lot of the hooks here don’t stick, and fans of Mayall and superstar sessions will get the most from this effort. ― Allmusic