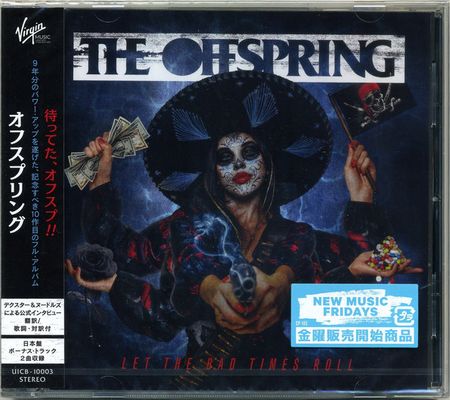 It’s no understatement that Let the Bad Times Roll, the Offspring’s tenth album, had a bit of a difficult birth. The group started to record material for a sequel to Days Go By not long after its 2012 release, entering the studio with producer Bob Rock in 2013. Not long afterward, they parted ways with their longtime label of Columbia, a process that didn’t go smoothly. The band managed to put out a single called “Coming for You” in 2015, but they didn’t complete a full album until 2021, by far the longest period between the Offspring LPs. This backstory doesn’t necessarily surface on the album itself. The glammy stomp “Coming for You” — Gary Glitter by way of SoCal punk — doesn’t necessarily sound older than anything else on Let the Bad Times Roll, which doesn’t mean to say the rest of the record sounds fresh. Mostly, Let the Bad Times Roll sounds like what it is: the work of middle-aged punk lifers who don’t change their style, sound, or perspective. They might sing about different things — witness the married-man lament “We Never Have Sex Anymore,” which also has just a hint of a Swingers swing to its rhythm — but Dexter Holland and Noodles, the band’s mainstays, retain a love of frenetic punk and loud guitars, elements that served them well back in the 1990s when they were delivered with a vigorous sneer. Here, the band sounds heavier and slightly thicker, qualities that certainly reflect the onset of age as much as lyrics where the group seems resigned to all the doom and gloom swirling around the culture at the dawn of the 2020s. All this means that Let the Bad Times Roll mirrors its time even if it doesn’t sound a thing like it: it’s a record by and for disgruntled old guys who are too sharp to indulge in nostalgia yet still don’t want to let the past go. ― Allmusic