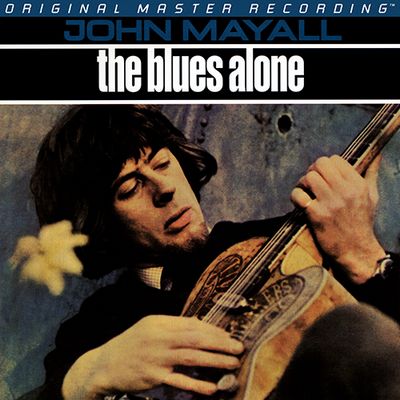 With a release coming only two months after Crusade, The Blues Alone, the first Mayall “solo” album (i.e. without The Bluesbreakers), was John Mayall’s third album of 1967, or fourth, if you count the various artists compilation Raw Blues. Like Raw Blues, it was released initially on Decca’s discount Ace of Clubs label to distinguish it from a regular Mayall album, although the distinction has been lost over time. It was actually recorded prior to Crusade on May 1, 1967. Mayall played and overdubbed all instruments except drums, which were handled by Bluesbreaker Keef Hartley, which was one way of dealing with his ongoing personnel difficulties (by this time, his bassist, John McVie, had left to join Fleetwood Mac). It also served notice that, despite his band being a spawning ground for several British stars by now, the real star of the group was its leader. But it didn’t quite prove that, since Mayall, while certainly competent on harmonica, keyboards, and guitars, doesn’t display the flair of an Eric Clapton or Peter Green, and the overdubbing, as is so often the case, robs the recording of any real sense of interplay. (The Blues Alone hit #24 in the U.K. and #128 in the U.S.) ― Allmusic