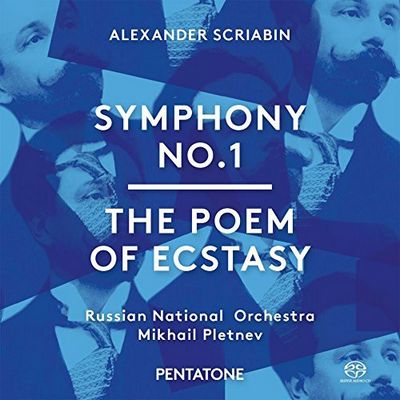 Alexander Scriabin’s development as a composer was marked by dramatic changes in his style, from the rather direct Romanticism of his Symphony No. 1 in E major to the more harmonically complex and mystical music of his middle and late phases, represented here by the Poem of Ecstasy (Symphony No. 4). This multichannel hybrid SACD recording by Mikhail Pletnev and the Russian National Orchestra presents both works in luscious state-of-the-art sound, which brings out the richness of Scriabin’s orchestration and puts both pieces in a spacious acoustic that allows them to have their proper impact. While the Symphony No. 1 is already grandiose in its six-movement form, Wagnerian harmonies, and long-breathed, passionate melodies, it is outshone by the Poem of Ecstasy, which is an explosive blast of energy compressed in one dynamic movement that strains toward cosmic rapture. Pletnev and his musicians deliver the Symphony No. 1 with the full range of expressions, from poignant lyricism to volatile climaxes, but they give the Poem a building intensity that is captivating, especially when experienced on a high-end sound system. This PentaTone recording is a fine place to start with Scriabin’s symphonic works, and newcomers to his music will find them quite accessible. ― Allmusic