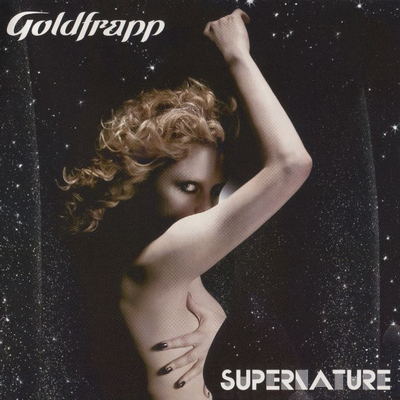 It’s something of a mystery why Mute Records waited until early 2006 to release Goldfrapp’s third album, Supernature, in the U.S. After all, when it came out in the U.K. the previous summer, it made the duo into a bona fide chart success, to the point where the album’s terrific lead single, “Ooh La La” — on which Allison Goldfrapp channels Marc Bolan’s dippy-cool vocals and lyrics over a shuffling, glam-tastic beat — drew comparisons to former S Club 7 star Rachel Stevens’ similarly glam-inspired hit “Some Girls.” While Goldfrapp might balk at being called (or compared to) a pop act, it’s undeniable that the duo has streamlined and simplified its sound since the baroque Felt Mountain days. It’s also undeniable that Supernature is some of Goldfrapp’s most accessible work. Coming across like the missing link between Black Cherry’s sexy, sharp-edged dancefloor experiments and Felt Mountain’s luxe soundscapes, Supernature sometimes combines the best elements from those two albums into something great, and at other times renders them into something surprisingly bland. Along with the aforementioned “Ooh La La,” the upbeat tracks find Goldfrapp becoming the robo-glam-disco gods that Black Cherry suggested they might: the starkly catchy “Lovely 2 CU,” the fabulously blasé “Ride a White Horse,” and “Satin Chic,” which could single-handedly make honky tonk pianos fashionable again, all use the duo’s inherently theatrical style to very catchy, immediate ends. Interestingly, though, the sweeping ballads that used to be Goldfrapp’s forte are the most uneven tracks on Supernature. It’s not that tracks like “Time Out from the World” and “Koko” aren’t pretty and ethereal enough, but they’re just not that distinctive. Likewise, “Fly Me Away” is pleasant, but maybe a little too pleasant — it almost sounds like it was commissioned for a travel commercial. However, “Let It Take You” shows that Goldfrapp can still craft gorgeous, weightless ballads, and “Number 1” nails the laid-back sexiness that many of the other slower songs attempt. It’s surprisingly heartfelt, too — is there a sweeter compliment than “you’re my Saturday”? It would be unfair to say that Supernature’s stripped-down pop is a dumbed-down version of what Goldfrapp has accomplished in the past, since it takes a certain kind of smarts to hone songs into instantly catchy essences like the album’s best tracks. Yet, as delightfully stylish and immediate as Supernature is, it’s still hard to escape the nagging feeling that Goldfrapp could make its ethereal sensuality and pop leanings into something even more compelling. ― Allmusic