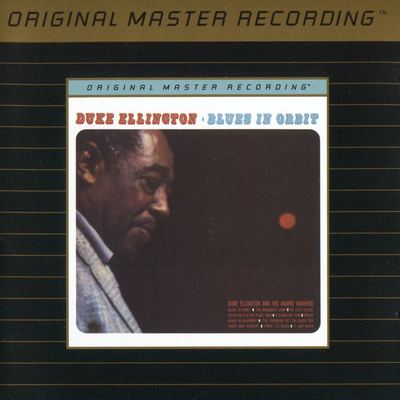 Blues in Orbit lacks the intellectual cache of the suites and concept pieces that loomed large in Ellington’s recordings of this period, but it’s an album worth tracking down, if only to hear the band run through a lighter side of its sound — indeed, it captures the essence of a late-night recording date that was as much a loose jam as a formal studio date, balancing the spontaneity of the former and the technical polish of the latter. Ellington and company were just back from a European tour when the bulk of this album was recorded at one after-midnight session in New York on December 2, 1959 — the arrangements had to be hastily written out when the copyist failed to appear for the gig. So on the one hand, the band was kicking back with these shorter pieces; on the other, the group was also improvising freely and intensely at various points. The title track, recorded more than a year before most of the rest, is a slow blues that puts Ellington’s piano into a call-and-response setting with the horns, with Ellington getting in the last word. “Villes Ville Is the Place, Man” is a bracing, beat-driven jaunt, highlighted by solos featuring Ray Nance, Harry Carney, and Johnny Hodges on trumpet, baritone sax, and alto, respectively. “Three J’s Blues” shows off composer Jimmy Hamilton playing some earthy tenor sax in a swinging, exuberant blues setting. “Smada” features Billy Strayhorn on piano and Johnny Hodges on alto, in a stirring dance number, and “Pie Eye’s Blues” is a hot studio improvisation featuring Ray Nance and Jimmy Hamilton trading three solos each. ― Allmusic